Global AIDS advocate steps back to fight TB at home, in Nunavut 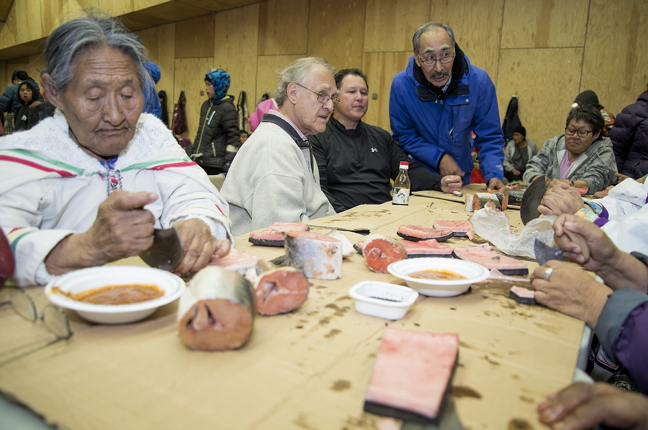 Stephen Lewis with Paul Quassa, standing, and Nunavut Health Minister George Hickes during a country feast in Igloolik last week. Lewis, an international health advocate, visited the Baffin community as part of a fact-finding mission for an upcoming report on TB in Nunavut, to be released through his NGO Aids-Free World. (PHOTOS BY RON WASSINK) 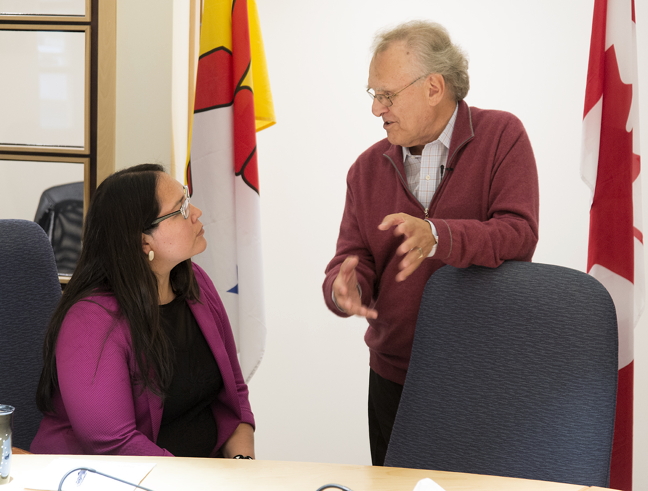 A world-renowned Canadian health advocate says Ottawa needs to apologize to Inuit for its past treatment of tuberculosis sufferers, and to start putting money into fighting the disease right now.

He visited Igloolik for two days, meeting with the hamlet and health centre staff, school age children, and elders. He also toured a social housing unit and attended a community feast.

His visit will lead to a report on TB in Nunavut, where he said he hopes to return in 2018.

While Lewis has worked to advocate against TB internationally, this is the first time he has focused on the disease in Canada.

But in Canada, he called Nunavut “the epicenter” for TB.

While visiting Nunavut, “we were exposed to issues for which we were entirely unprepared,” Lewis said, during a Sept. 9 news conference at Iqaluit’s Frobisher Inn.

“There are 14 out of the 25 disparate communities wrestling with active and latent cases, many of them children,” he said.

In Igloolik alone there are 11 active cases and many more latent cases in the community of about 2,000 people. With a small territorial population of about 35,000, these numbers “loom very large,” he said.

And that’s just what is happening right now.

Lewis met with elders in both Iqaluit and Igloolik, who shared their own stories and stories of loved ones who were sent south in the 1950s and 1960s. Many people never saw their family members again, and never found out where they were buried.

Lewis said every elder he spoke with wept when they related the experience of being taken away on a hospital ship and held in a southern sanatorium with no way of communicating with any of the staff.

He said the memory of those experiences creates, “a level of stigma that can never be eradicated,” adding that the trauma calls for an apology, training to decrease TB in the territory, and resources for families to find their lost loved ones, including travel to their gravesites.

“Nothing less will do,” Lewis said.

With the current Liberal government nearing its two-year mark in its mandate to mend ties with Indigenous Canadians, “I have yet to see enough evidence of this partnership in reconciliation,” said Lewis, a past leader of the Ontario New Democratic Party.

While the feds have a new Department of Indigenous Services and a “strong minister” in Jane Philpott, Lewis said next steps by the government will be a test of their commitment.

Lewis, who spends a lot of his time seeking out international development assistance, estimated that about $150 million Canadian dollars are currently being spent to fight TB in other countries.

“Why can’t you do that in Nunavut, with Canadian citizens, in an Indigenous community?” he asked rhetorically. “I can not imagine why, in a strong democratic western society, you cannot summon the dollars to do the job,” Lewis said.

The root causes of TB can be found within Nunavut’s poor “social determinants of health,” he said. That term refers to the things that make a society healthy, or not, such as poverty, food security and housing.

After visiting a public housing unit in Igloolik, Lewis said, “The mold was everywhere, [there were] holes in the walls, water not working, mattress on the floor… You can’t have that kind of thing and expect tuberculosis to be under control.”

Dr. Gonzalo Alvarez, a TB researcher from the Ottawa Hospital who has been working to reduce the disease in Nunavut for about 10 years, said he has never seen anyone with Lewis’ level of international influence come to speak on TB in the territory.

“When he speaks, people listen. And it’s incredible that in such a short time he was able to pick up what Inuit are telling him, by listening,” Alvarez said.

In Canada, both Indigenous and immigrant populations experience high levels of TB. While there are higher than average rates in First Nations communities, rates of TB among Inuit are much higher, Alvarez said.

Stephen Lewis Statement on TB in Nunavut, Sept. 9, 2017 by NunatsiaqNews on Scribd