“This warming is due to human activities” The world is warming, the World Meteorological Organization said Nov. 29 in a statement released at UN climate talks in South Africa. (FILE PHOTO)

As Nov. 29 reports said Canada will not sign on to a second binding international agreement to reduce climate-warming greenhouse-gas emissions, the World Meteorological Organization released a statement on the “status of the global climate” at the United Nations talks on the Kyoto protocol in Durban, South Africa.

The WMO confirmed that the world’s temperatures are rising.

“Our role is to provide the scientific knowledge to inform action by decision makers,” said WMO Secretary-General Michel Jarraud. “Our science is solid and it proves unequivocally that the world is warming and that this warming is due to human activities.”

The statement noted that:

• global temperatures in 2011 are currently the tenth highest on record, and that the 13 warmest years have all occurred in the 15 years since 1997; and,

• the extent of Arctic sea ice in 2011 was the second lowest on record, and its volume was the lowest.

These are among the highlights of the annual WMO statement which gives a global temperature assessment and a snapshot of weather and climate events around the world in 2011.

It was released Nov. 29 at the international climate conference in Durban.

“Concentrations of greenhouse gases in the atmosphere have reached new highs. They are very rapidly approaching levels consistent with a 2-2.4 degree Centigrade rise in average global temperatures which scientists believe could trigger far reaching and irreversible changes in our Earth, biosphere and oceans,” Jarraud said.

In the Arctic, scientists say this average temperature rise could be more than twice as much as 2 C.

This is the tenth equal warmest year since the start of records in 1850.

Surface air temperatures were above the long-term average in 2011 over most land areas of the world.

The largest departures from average were over Russia, especially in northern Russia where January-October temperatures were about 4 C above average in places, the WMO says.

• unlike the 2007 season, both the Northwest and Northeast Passages were ice-free for periods during the 2011 summer;

• sea ice volume was even further below average and was estimated at a new record low of 4200 cubic km, surpassing the record of 4580 cubic km set in 2010.

• the above-average temperatures in most northern polar regions coincided with the second-lowest Arctic sea ice minimum extent and the lowest sea ice volume on record.

The provisional statement was released at the 17th Conference of the Parties to the United Nations Framework Convention on Climate Change, taking place in Durban Nov. 28 to Dec. 9.

For some of the background on what’s at stake, go here. 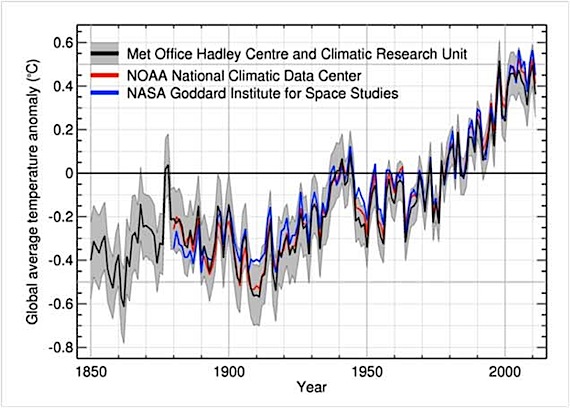 This graph from the Nov. 29 climate assessment from the World Meteorological Organization shows the spike in world temperatures.