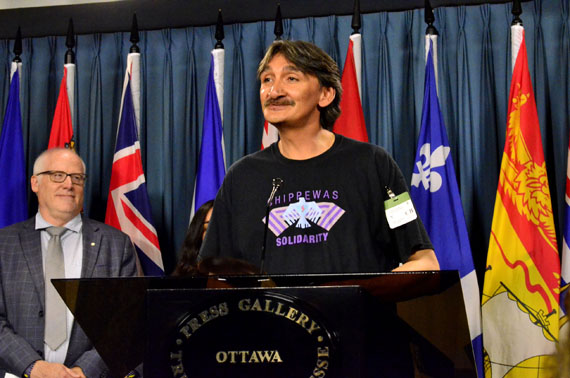 The former mayor of Clyde River, Jerry Natanine, at a press conference in Ottawa July 26. (PHOTO BY JIM BELL)

“It was a David and Goliath fight and, thankfully, David won,” Paul Crowley, WWF-Canada’s vice president of Arctic conservation, said in a statement.

Crowley said the Supreme Court ruling shows the National Energy Board must be reformed and that “Canada’s antiquated laws regulating oil and gas activities in the Arctic need to be modernized.”

In its decision, the Supreme Court found the seismic testing proposal, put forward by a consortium of related companies from Norway operating under the name Multi Klient Invest, posed serious potential risks to marine mammals and to the Aboriginal right of Inuit to hunt them.

For that, and other reasons, the court said the proposal required “deep consultation” — a form of consultation that includes intervener funding, oral hearings, and the ability to answer important questions promptly.

But the NEB did none of that, the Supreme Court found, and failed badly in its duty to carry out the Crown’s obligation to consult indigenous people on development projects that affect them.

“Although the appellants had the opportunity to question the proponents about the project during the NEB meetings in the spring of 2013, the proponents were unable to answer many questions, including basic questions about the effect of the proposed testing on marine mammals,” the judgment said.

Eventually, they did answer those questions—in a 3,926 page document that many people in Nunavut could not download over the internet.

The Supreme Court said, however, that regulatory bodies like the NEB do have the ability to carry out the Crown’s duty to consult Indigenous people.

“As we have said, while ultimate responsibility for ensuring the adequacy of consultation remains with the Crown, the Crown may rely on steps undertaken by a regulatory agency to fulfill the duty to consult,” the judgment said.

Aluki Kotierk, the president of Nunavut Tunngavik Inc., said in a statement that NTI agrees with that position.

She also said it’s NTI’s position that a strategic environmental assessment for Baffin Bay and Davis Strait should have been done before any seismic testing was permitted.

“A [sic] SEA would allow for the assessment of potential benefits to Inuit and effects on marine mammals,” her statement said.

That long delayed strategic environmental assessment finally got going this past February, under the leadership of the Nunavut Impact Review Board.

Even the Inuvialuit Regional Corp., which is heavily invested in the oil and gas industry and was highly critical of Prime Minister Justin Trudeau’s unilateral five-year ban on offshore Arctic oil and gas exploration earlier this year, lauded the Supreme Court’s decision.

In a statement, the IRC said the ruling strengthens treaty rights, because “the court removed doubt as to the place of the duty to consult and accommodate in environmental regulatory review processes.”

The IRC also said they’re happy with how the ruling clarifies the role of the Crown when administrative regulatory bodies conduct environmental reviews.

“This decision says that while the Crown may rely on the processes of administrative tribunals to fulfill the duty to consult, the Crown always holds ultimate responsibility for ensuring consultation is adequate,” IRC lawyer Kate Darling said in the news release.

As for the Qikiqtani Inuit Association, they said in a statement that they “repeatedly objected to the National Energy Board, to industry and to government officials” on the lack of meaningful consultation with Inuit on seismic testing.

The QIA also said they submitted comments “throughout the legal process” and provided money to help Clyde River with its legal fees.

At a July 26 press conference in Ottawa, however, the former mayor of Clyde River, Jerry Natanine, described those financial contributions as “nominal.”

And Natanine said the people of Clyde River “felt everything was against us” and that they could not have mounted their appeal without help from Greenpeace.

But in a blog post on July 27, the QIA said they contributed $119,674 to help Clyde River oppose MKI’s seismic testing proposal.

In the blog post, QIA said this is what they contributed to Clyde River:

• $57,509 for workshops and consultations for the community to gather information for the legal battle; and

• $12,165 in travel costs to allow delegates from the hamlet and HTO to attend court hearings.

Inuit Tapiriit Kanatami, the national Inuit organization, said the decision illustrates why Canada should implement the United Nations Declaration on the Rights of Indigenous People and that the federal government should recognize the principle of free, prior and informed consent to development projects that affect Indigenous rights.

“Canada can avoid protracted litigation of this nature in the future through full implementation of the UN Declaration, in partnership with indigenous peoples,” ITK President Natan Obed said in a statement.