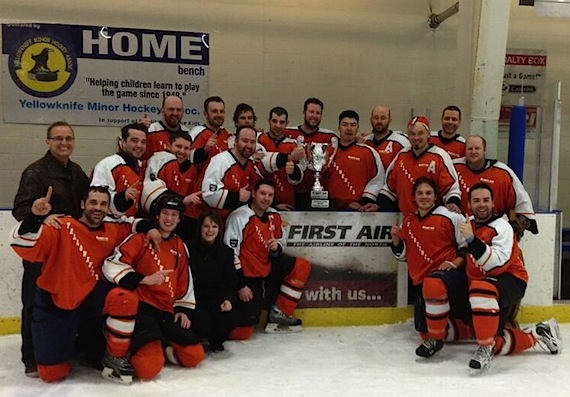 Here’s the Yellowknife Flyers with the Northern Hockey Challenge Cup they won this past weekend in Yellowknife. Yellowknife took the cup home by winning three straight games in a best-of-five competition against the Iqaluit Icemen. (PHOTO COURTESY OF FIRST AIR)

It came down to a three weekend games of a possible best-of-five series, held in the Northwest Territories capital, where the Western Arctic division’s best — the Yellowknife Flyers — swept the best of the East, Iqaluit, to keep the cup at home.

More than three month’s of hockey, with dozens of flights throughout the North ended for Iqaluit in a 7-3 loss on Sunday, which followed a close 3-2 victory by Yellowknife the night before, in game two of the series.

“For the second game, we felt we should have had that,” Iqaluit’s team manager-player Chris Côté said from Yellowknife on Monday morning, as the squad packed up for their return trip home.

“We’re pleased with the effort, disappointed with the outcome – that’s all.”

Perhaps hardest to take, though not unexpected, was the team’s 7-2 loss on Friday night.

The Iqaluit Icemen journeyed to Yellowknife that day on a flight that took six hours instead of four, due to delays, and the team shuttled straight to the Ed Jeske arena from the airport to get underway in a game delayed by one hour.

Playing short a few regular players meant it was time for Côté to suit up, as he had done throughout the tournament in times of player shortages.

“It was a challenge that way, having to play that game on Friday night,” he said. “It wasn’t the worst thing to go through, but it was a long day.” A 9 p.m. start to the game meant 11 p.m. on Iqaluit time.

Playing on Ed Jeske’s Olympic-sized ice surface, four metres wider than other rinks in the North, also took some getting used to.

Despite the challenges, Iqaluit adjusted quickly, and kept Yellowknife goalies busy throughout the final series — outshooting the Flyers by a margin of almost two to one.

“We just couldn’t finish, couldn’t find the net,” said Côté. “We were hitting the post and missing the net completely, and their goalies were making the big saves.”

Mujcin earned first star-of-the-game honours for the effort, which effectively buried the Icemen’s chances of taking the series back to Iqaluit.

“I’m disappointed we couldn’t bring this tournament back home for game four and five, but hey, it’s the way it goes,” Côté said.

“Right now I’m just glad it’s over. There was a lot of hockey this year, and a lot of guys are just burned out.”

Côté, like most players and managers in the tournament, said he was happy to see the tournament promote hockey in northern communities, and thankful for tournament sponsor First Air’s willingness to organize and fund the NWT, Nunavik and Nunavut-spanning tournament.

Still, he added, with players having careers, full-time jobs and family lives to contend with, it’s important to keep the tournament in perspective.

First Air counted the big tournament a success, and will consider whether to keep the hockey challenge running as a yearly event.

“I think the response has been fantastic,” Michael Olson, First Air’s director of sales for the Western Arctic, told Nunatsiaq News on April 29.

Olson, who attended the games in Yellowknife, noted the attendance of NWT Premier Bob McLeod at Sunday’s game, and Nunavut MP Leona Aglukkaq in the crowd on Saturday, cheering for Iqaluit.

“It definitely got everybody looking at hockey and getting this sort of pan-territorial rivalry going,” he said.

The idea for the tournament first took root last fall, when a player’s strike in the National Hockey League left hockey enthusiasts without teams to follow for their favourite sport.

“The North is very hockey-engrossed,” said Olson. “Everybody enjoys playing and watching hockey.

“So we looked at how we could put something like [the Northern Hockey Challenge] together.”

First Air executives and hockey tournament commissioner Darrell Greer of Rankin Inlet then sat down to work out the details, he said.

“The people have been very supportive. The fans were out there cheering them on in Hay River and Inuvik, in Rankin and Iqaluit, Kuujjuaq – we had some really good crowds,” said Olson.

“The excitement has been really good, and we want to build on that excitement.”