“I tried my best and learned a lot from this experience.” 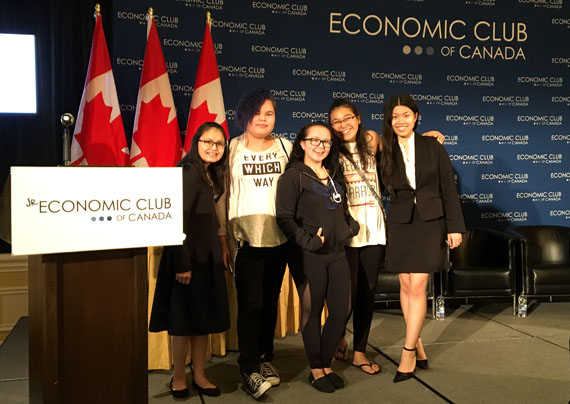 The first time Tsoi Yung (Elaine) Lau, 17, stood before her Iqaluit classmates to give a presentation, not long after arriving from Hong Kong about five years ago, her voice shook and her legs wobbled.

That’s because Lau arrived in Iqaluit able to speak hardly any English.

She constantly had to ask people to repeat themselves and slow down.

But Lau has come a long way: in nearly-flawless English, she told Nunatsiaq News Aug. 30 about a business plan she pitched to some of the country’s biggest business executives in Toronto Aug. 26.

“It’s taken time and courage to overcome this fear and make a presentation with confidence,” Lau said in Iqaluit’s Caribrew Café.

Lau was one of five Nunavut students who participated in the Bay Street Boot Camp in Toronto from Aug. 22 to Aug. 26.

The camp aims to improve financial literacy among Canada’s youths and to foster entrepreneurial skills.

Lau said she spent half of each day at the camp listening to lectures from successful business people, and the other half developing her own business plan.

The week-long event culminated in a competition among the 50-odd participants, who formed their own business plans in groups of two or three.

After the first round of judging, the top five business plans were chosen for the finals.

The last five groups standing were judged by seven or eight business executives from large firms like TD Bank.

“My goal was to make it to the top five, and our group did that, so overall we were very happy. We didn’t make the top three, but I tried my best and learned a lot from this experience.”

Lau’s group—comprised of Lau and two Ontario students she met—devised a business plan for a phone app.

The app would provide youths from across Canada a platform on which to pose environmentally-friendly challenges to each other.

“For example, a student in Toronto could challenge a student in Iqaluit to walk to school every day. It’s just a small thing, but would help the environment.”

App users would gain points and business partners, such as universities or big companies promoting a green image, would provide incentives.

“So students using the app could win a scholarship or something like that.”

But besides her impressive results at the Bay Street Boot Camp, Lau said she took away a number of important life lessons.

“I learned how to be more independent, helping out with our Nunavut group. And I learned the importance of building relationships with others, socializing and networking. People can help you, and they know other people who maybe can help you too.”

And Lau even found time to take in a few urban attractions on her first visit to Canada’s biggest metropolis.

“I only slept like three hours a night because I had so much work to do, but also because we wanted to have fun, go see things like the CN Tower.”

Lau said she has one year of high school in Iqaluit left but is already eyeing enrollment at the University of Toronto.

Eventually, Lau said she hopes to have a career in business or medicine.