“We were really hoping to win — and we won” 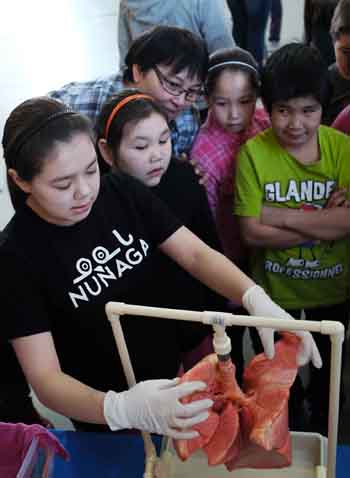 Bridget Oovaut, from Quaqtaq, shows a group of student how second hand smoke affects the lungs at Pitakallak school in Kuujjuaq Feb. 24. (PHOTO BY JADE DUCHESNEAU-BERNIER/KSB) 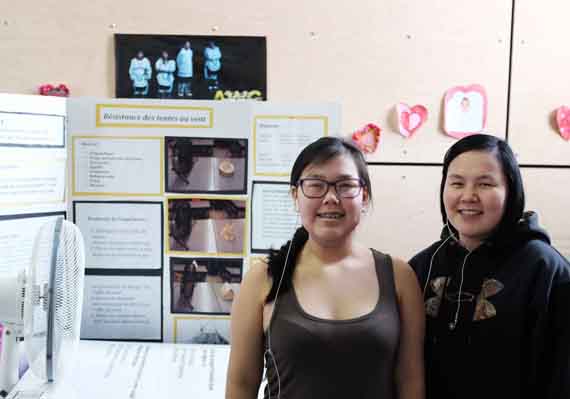 KUUJJUAQ — It was a lot to learn in a couple of days.

When you walked into the gym at Pitakallak school in Kuujjuaq this week, you might have discovered at what pressure balloons will pop, how stars are born or the impact of second hand smoke.

The Kativik School Board hosted its regional science fair Feb. 24 and Feb. 25, gathering young scientists from across Nunavik’s Ungava coast.

In the end, Kangiqsualujjuaq students Teresa Annanack and Julianne Imbeault took the top honours for their project comparing different tents’ resistance to wind.

The girls’ booth tested three different structures: a traditional Inuit tent or tupiq, a tipi and a modern day commercial tent. They set up miniature versions of each tent and then blasted them with a fan.

The tent that showed the best resistance? The tupiq, their experiment found.

Imbeault and Annanack said their science project was inspired by culture teacher at Ulluriaq school, Alicie Unatweenuk, who encouraged them to look at the differences between modern and traditional tools.

At a Feb. 25 gala in Kuujjuaq, Imbeault said she had goosebumps waiting for the science fair winners to be announced.

Annanack, 17, said the event was exciting.

The girls go home with $500 in prize money, but they won’t be putting away their project just yet.

Imbeault and Annanack will represent Nunavik at the 2015 Quebec Aboriginal Science Fair next month in Kanawake, Quebec.

The KSB will host a regional science fair on the Hudson coast in 2016. 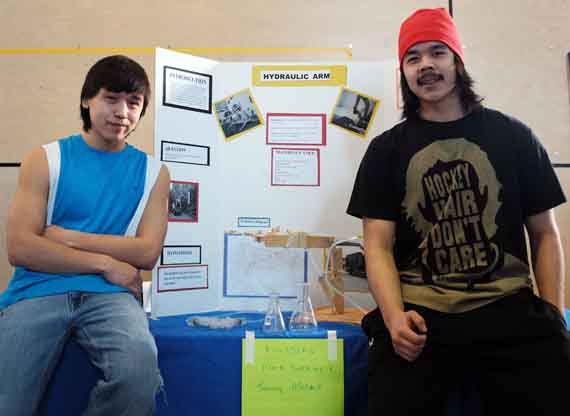 Mark Tukkiapik and Tommy Makiuk from Kuujjuaq show off the hydraulic arm they fabricated for their science fair project. (PHOTO BY JADE DUCHESNEAU-BERNIER/KSB)