Youth in Durban wonder if negotiators are listening

“Climate change will have the most serious implications for Inuit youth” 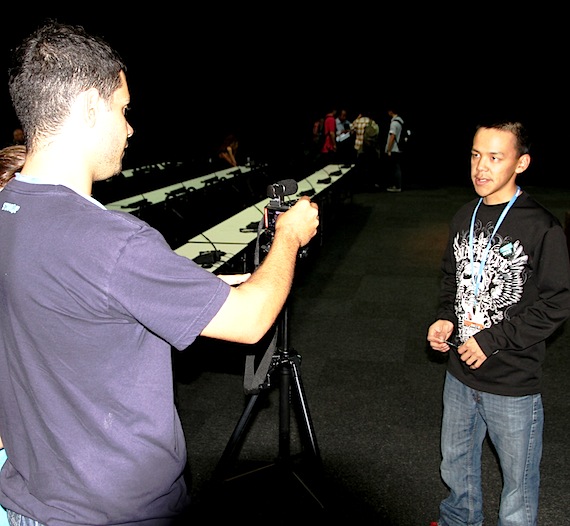 Jordan Konek of Arviat speaks to an aboriginal Australian reporter about the Nanisiniq Arviat history project Dec. 5 in Durban, South Africa, where he and Curtis Kuunaq are attending the United Nations climate change conference. (PHOTO BY FRANK TESTER)

“There is a real need for aboriginal and other youth to work together on this problem, and to do this, we need to know a lot more about our own histories,” Konek told Abbey Ramirez-Shillingfrod of the Australian Youth Climate Coalition, an aboriginal Australian, who wanted to know more about the Nansiniq project.

“Climate change will have the most serious implications for Inuit youth. It is their future that is under discussion here in Durban. And what happens in the Arctic will affect everyone. The Arctic is warming up faster than any other place on the planet. Once the Arctic tundra starts to heat up and produce methane gas, we are all in big trouble,” Konek added.

Meanwhile, negotiators at the climate change summit — whose theme is “saving tomorrow today” — pay little attention to youth and that message.

Youth are seldom mentioned here in discussions about the future and importance of the Kyoto Protocol, the United Nations Green Climate Fund and other measures to address the growing threat of climate change.

During its news conferences, the Canadian government has failed to mention the impact of climate change on the future of Canada’s youth.

And, so far, its major focus appears to be selling Alberta’s tar sands as a sustainable and environmentally-responsible form of oil production.

At the same time, booths in the media centre are overwhelmingly staffed by youth concerned about climate change.

Wearing jackets covered in logos from Canadian oil and gas companies, they said Canada’s position at the climate change talks is designed to protect the interests of the oil and gas industry and the development of tar sands.

Across the road at the international conference centre, members of an older generation continue Dec. 6 to squabble over a details of future agreements, mostly dealing with who will pay for what measure intended to mitigate, not curb, climate change.