It’s time to roll up in Nunavik; immunization campaign against H1N1 starts next week 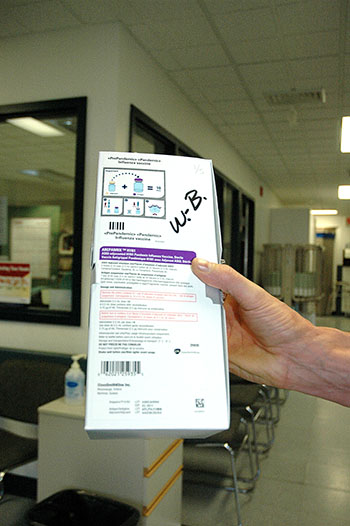 Vaccinations against the H1N1 virus that causes swine flu will start in Nunavik next week and will be given by local community health care workers, including the nurses who staff Kangiqsujuaq’s health clinic. (PHOTO BY SARAH ROGERS)

KANGIQSUJUAQ — Nunavimmiut are preparing to roll up their sleeves as the first doses of the H1N1 vaccine to fight swine flu land in the region.

Immunization clinics for the general public are expected to start Nov.2.

Nunavik health care workers and those considered at a high risk of infection, such as people with chronic illnesses, are already being vaccinated as part of Nunavik’s largest-ever immunization campaign.

It’s unique because the vaccines will be given to the entire population at one time, says Dr. Serge Déry, the region’s director of public health.

“In the south (of Quebec), they’re receiving the vaccinations in batches,” Déry said. “Since we are a remote region, we’ve been entitled to receive the whole lot at once to immunize everyone. Once the mass immunization starts, it will be first come, first served.”

As part of a regional awareness campaign, information about the swine flu immunization effort is to arrive in peoples’ mailbox and be broadcast on local radio.

In Kangiqsujuaq, a two-day clinic will take place in the Arsaniq school gymnasium next week.

People elsewhere in the region are advised to call local nursing stations to find out when their local immunization clinic will be held, Déry said.

Most of the health care centres in Nunavik’s 14 communities have enough local staff to equipped to administer the vaccines, Déry said, although nurses from outside may be sent in, if necessary.

Although healthcare workers have had past experience with immunization, they will also receive refresher training this week, Déry said, to deal with any reactions to the vaccines, such as muscle pain or headaches.

But, he added that “we’re not expecting to see any side effects.”

The first confirmed cases of the H1N1 virus in Nunavik appeared last July and grew to 23 by the end September.

The virus has been kept at bay in all but one community, Kuujjuarapik, where a more recent outbreak affected six people.

“We do expect to have quite a severe second wave, and the best way to prevent it is to get immunized. By getting immunized, you’re not just protecting yourself, you’re protecting your family, your neighbours, your community.”

Déry said that once 75 to 80 per cent of a population has been vaccinated, the virus can no longer travel freely.

A poll taken last weekend found that 51 per cent of Canadians do not plan to get vaccinated.

But skepticism around the shot seems to have stayed in the South.

Expectant mother Christina Kiatainaq says she plans on getting immunized as soon as she can, along with her two children.

The seasonal flu vaccine will be offered later this year to give priority to the H1N1 vaccination campaign.