“Everything was as it was left” 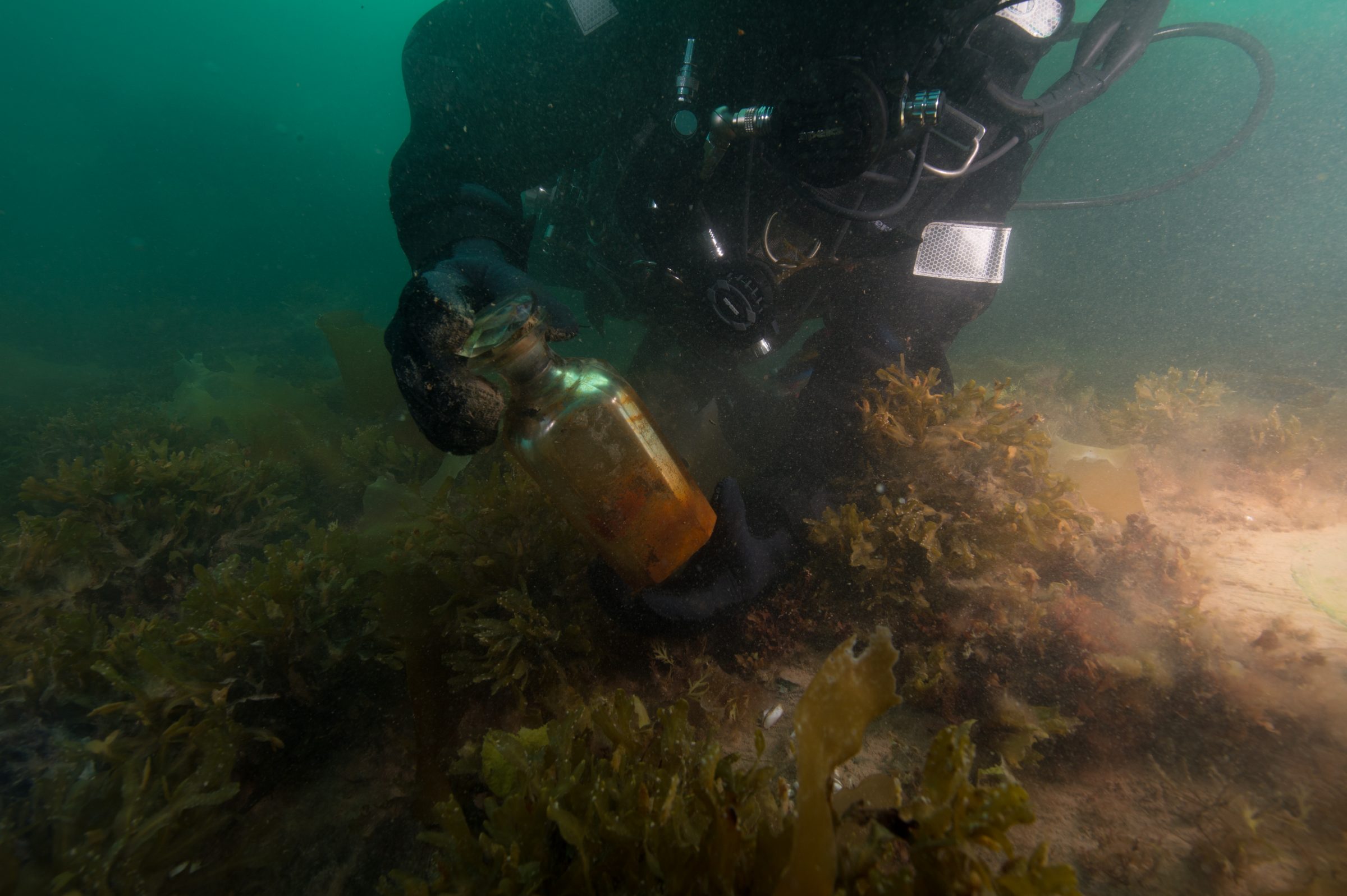 A diver explores the HMS Erebus wreck in the fall of 2019. (Photo courtesy of Parks Canada)

New discoveries from the ill-fated 1845 Sir John Franklin expedition add to a growing story about what happened to two vessels.

The expedition’s ships, the HMS Erebus and the HMS Terror, set sail from England on May 19, 1845, in search of the Northwest passage with Sir John Franklin and 128 crewmen on board.

But tragedy struck after the expedition’s first winter, when the ships became trapped in thick, year-round sea ice northwest of King William Island.

It wasn’t until researchers looked back at recorded Inuit testimony that the ships’ whereabouts were narrowed down. The Erebus was discovered in 2014, while the Terror was found in 2016.

This past fall Parks Canada’s underwater archaeology team once again explored the wreck of the HMS Erebus, which sits on the ocean floor outside Gjoa Haven.

Today, Jonathan Wilkinson, the federal environment minister, Pamela Gross, president of Inuit Heritage Trust, and Stanley Anablak, president of the Kitikmeot Inuit Association, unveiled some of those artifacts at a ceremony at Parks Canada’s Conservation Laboratories in Ottawa.

Among those items are epaulettes that may have belonged to Third Lieutenant James Walter Fairholme. Epaulettes were part of the British Navy officer’s dress uniform, worn over the shoulders of a coat so the gold fringes hang downwards.

But in an interview with Nunatsiaq News, Marc-André Bernier, manager of Parks Canada’s underwater archeology team, gets most excited when he talks about the items that help paint a clearer picture of the men who were on board the ship.

“Some of the interesting and more significant elements are when they actually touch individuals. And when we can link objects to people who were on board,” Bernier said.

This time around, the dive team focused on excavating from a specific area of the wreck. They worked on three of the ship’s cabin spaces, one of which was the pantry belonging to Edmund Hoar, Sir Franklin’s steward. Hoar, from Portsea, England, was 23 years old when the expedition set sail.

“This gentleman was the captain’s assistant and he would set the table and cater to his needs. This was not his cabin, but it was basically his storage area. We found many plates, service wear, service plates, bowls, strainers.”

They also found a stamp made of three lead pieces with Hoar’s name on it. Bernier said the stamp would have been used to stamp documents or items of clothing with Hoar’s name to identify them.

In the same area that Hoar’s lead stamp was found, the divers also recovered an “unidentified object, made of wood” that belonged to Frederick Hornby, who was originally on the HMS Terror when the expedition left Europe.

“So this object is a sign that things were moving around during the expedition. Was it the individual who moved around or the object itself? We’re not sure. But those are starting to give us portraits of some of the people that were on board,” Bernier said.

One of the other cabins excavated by the divers belonged to one of the ship’s officers. Also discovered was a navigation tool and some clothing, Bernier said.

“You’re basically going through somebody’s personal belongings from 170 years ago. Sometimes it’s easy when it’s a glass bottle that’s shining. But sometimes there’s pieces that you have to try and figure out,” Bernier said.

But while that cabin was “dense” with materials, just two cabins down, where the epaulettes were found, another cabin was nearly empty.

“That cabin seems to have had its content, as far we can see now, emptied,” Bernier said.

Although the divers can’t access some parts of the ship, Bernier said the team used “mini robots,” or remotely operated vehicles, to go into some of the deeper parts of the wreck, including the ship’s storage area.

Like the officer’s cabin, that room was also oddly bare.

“There were not too many stores, casks and food and that kind of stuff. It’s pretty empty,” Bernier said.

Although unusual, Bernier said he can’t draw any conclusions about the empty spaces just yet.

“[What] we’re trying to find here are patterns to understand, ‘Was this ship abandoned, and by whom, and who still had things on board?’” he said.

But one of the biggest questions facing the underwater archeology team is whether the contents of the sunken ship are still intact after 170 years of waves and weather have aged it.

“The cupboards, the desks, the furniture pieces that we excavated were very, very dense in artifacts. Everything was as it was left,” Bernier said.

“The potential of finding extremely well-preserved materials is amazing. We found lead pencils and you can actually read the maker’s mark on it.”

But divers still can’t access the captain’s cabin because the ship’s upper deck, where the cabin is located, has collapsed even more than it had during the team’s last dive. Bernier said after excavating the areas that are accessible, they will move slowly toward the more difficult areas, like the captain’s cabin.

“The more we move under these areas that are maybe less accessible, the potential of finding better preserved things is greater to a certain extent,” he said.

Previously, the Parks Canada divers used scuba gear and wore dry suits as they descended into the frigid Arctic waters. But that gear had its limitations, Bernier said.

“It’s basically diving with tanks on your back and you’re limited by the amount of air that you have, which was basically about an hour. And after an hour we’d get cold in the water with dry suits,” he said.

But this time, the team had a barge that floated at the surface above the wreck. That barge was equipped with a system of large hoses that supplied the divers with air from the surface. It also fed warm water into their diving gear, meaning they wouldn’t get cold while spending long periods of time under water.

With the new equipment, the divers’ average time spent underwater jumped from 40 minutes to an hour and 20 minutes. One diver even stayed underwater for over three hours, Bernier said.

Also on the barge was a field lab. That’s where Jonathan Puqiqnak, an archeological assistant with Parks Canada’s underwater archeology team and a resident of Gjoa Haven, spent time recording artifacts that were brought to the surface.

“For people in Gjoa Haven it’s very exciting to find these discoveries. Different artifacts that were brought up…. It’s a new experience for someone like me that came in from my home community,” Puqiqnak told Nunatsiaq News.

“For the elders in Gjoa Haven, they’re very excited to see the artifacts. It’s still very brand new and it’s amazing that it’s lasted for this many years,” he added.

After spending so much time watching his colleagues descend to the Erebus, Puqiqnak said he is taking the next step to joining them. He’s taking archeology courses and diving lessons and hopes to soon have a chance to explore the 170-year-old wreck in person.

“I’m very excited. Everything is a new experience for me,” he said.

The recovered artifacts are undergoing preliminary analysis at Parks Canada’s conservation laboratories in Ottawa. But before that, they were brought to Gjoa Haven and Cambridge Bay and shared with the community, Bernier said.

The new artifacts are also co-owned by Nunavummiut and the federal government. That’s after a memorandum of understanding was signed between Canada and the Inuit Heritage Trust last year that lays out how the two organizations will work together to share, conserve, study and protect the artifacts.

The HMS Terror and HMS Erebus sites are the first national historic sites to be jointly managed by Canada and Nunavut Inuit.

Parks Canada has also established an Inuit Guardians program to ensure the areas surrounding the wrecks are protected.

For Bernier and his team, the knowledge that an unexpected amount of the ship’s contents are still intact after all this time is encouraging as they move forward with the exploration of the Erebus.

“Every dive is a discovery. When you start excavating, you wake up in the morning and you get ready and it’s not ‘if we’re going to find something,’ it’s ‘what are we going to encounter today,’” Bernier said.