Cambridge Bay still has CHARS in its eyes 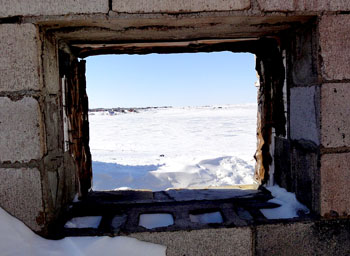 What’s not to love about Cambridge Bay, seen here through the window of its former Catholic church. People in Cambridge Bay hope officials in Ottawa agree, and decide to put Canada’s future high Arctic research centre in their community. (PHOTO BY JANE GEORGE)

But they also say Harper won’t announce whether Pond Inlet, Resolute Bay or Cambridge Bay is to become home to the research station, nicknamed CHARS, until August when he makes another sovereignty-themed visit to Nunavut.

For these three Nunavut communities, it’s been a long wait to hear where CHARS, first promised in the 2007 throne speech, will be built.

However, Cambridge Bay’s hamlet leaders are not put off by the lack of news: they already say “when” CHARS comes to their community, not “if.”

Some residents, when asked about CHARS, say they feel certain the research station will go to the Baffin region or that they’d heard rumours to that effect.

But, if no news is good news, Cambridge Bay MLA Keith Peterson, who said he had heard nothing definite about CHARS’ future site, remains hopeful that his community will be selected.

“It would be a tremendous boost not just to Cambridge Bay, but to all the Kitikmeot,” Peterson said in a recent interview. “It would have all kinds of spin-off benefits to the Kitikmeot, which often feels left out of decisions and important things.”

At stake are millions of dollars in spin-offs and at least 55 jobs.

The department of Indian and northern affairs says CHARS will be “a world-class, year-round multidisciplinary facility on the cutting edge of Arctic environmental monitoring and research issues.”

Its role will be to build Canada’s knowledge about the Arctic, strengthen its sovereignty in the region and enhance environmental stewardship.

To rally support for its selection as CHARS’ future home, Cambridge Bay campaigned hard in 2009, relying on a custom-made promotion and marketing plan to help tout the many advantages of this community of 1,500.

For the plan, consultants looked at the criteria the federal government might use in selecting the final location for CHARS- such as, can the site deliver a world-class science and technology research program, can it build and maintain the centre and can it provide benefits for northerners?

To all these questions, Cambridge Bay offers a resounding “yes.”

Although Resolute Bay’s polar continental shelf project has traditionally been the jumping-off point for High Arctic fieldwork, researchers also carried out 111 projects in Cambridge Bay from 2004 to 2008.

And more research could be done around Cambridge Bay, say its CHARS promoters: the community lies in an environmentally diverse region, with four different vegetation areas, as well as zones affected by global warming, places rich in minerals— and the Northwest Passage.

Cambridge Bay’s location at the western entrance to this sea route could demonstrate Canadian sovereignty along the waterway, local CHARS promoters say.

Cambridge Bay also has 68 businesses, of which 38 could offer services to scientific and technological research projects, in addition to many privately-owned homes, recreational facilities, a health centre, Nunavut Arctic College, a visitors centre, library and cultural centre, territorial park and many nearby sites with archeological or historical interest.

Teacher turnover in its two schools is only about 25 per cent — and many students go on to graduate from Grade 12 at Kiiliniik High School.

An educated population means there would be more local workers and opportunities for CHARS to collaborate with the community.

But possibly the most powerful argument in favour of Cambridge Bay is its lower cost of living.

That’s because Cambridge Bay is much closer to major southern airports than Pond Inlet or Resolute, and, as a result, it’s much cheaper to get in and out of.

A round-trip airfare between Cambridge Bay and Edmonton costs about $1,700, whereas a round-trip airfare from Pond Inlet to Ottawa can cost $2,6oo and up to $5,100 from Resolute— more than it costs to fly from Ottawa to Norway’s Arctic research station in the Svalbard Islands.

Shipping cargo to Cambridge Bay is also about 50 per cent cheaper than to the other two communities.

All this means the cost of building and staffing CHARS would be a lot less expensive.

While no one knows — or is willing to say yet — which community is set to host CHARS, one thing is certain: if CHARS doesn’t go to Cambridge Bay, there will be a lot of disappointed people in this community.