No end in sight for Nunavut housing shortage

Social housing could get “increasingly unmanageable”

There’s no end in sight for Nunavut’s perpetual housing shortage, but the constant construction of more public housing units will not fix the problem, the 2010 Nunavut Economic Outlook finds.

“What is troubling about the supply and demand conditions for public housing from the perspective of economic planning, public finance and even poverty reduction is the prospect of there being no end in sight to the growing demand for public housing,” the report finds.

The economic outlook document, produced for the Nunavut Economic Forum, was released Jan. 27.

The report said unless Nunavut makes “significant changes” to the way it approaches housing, the territory’s housing shortage will become a permanent feature of life.

That’s because, the report said, the territory’s young population puts demands on the government’s housing supply that the government cannot keep up with.

“The endless demand means government’s annual construction of public houses cannot stop. This draws funds away from other areas of need and adds to the overall operations and maintenance budget,” the report said.

And unless the government develops “grander initiatives,” the size of the territory’s public housing stock will “grow to an increasingly unmanageable number and yet demand for more will still exist.”

Right now, the average cost to government of maintaining a social housing unti is $21,950 a year.

Because of this, the Nunavut Housing Corp.’s annual budget now eats up 15.3 per cent of territorial government spending each year, a figure that could grow to unbearable levels.

To fix this, Nunavut needs more people who are financially independent, which means a stronger wage-based economy, more job opportunities and more education, skills and labour mobility, the report said.

Another option may be to seek an “alternative housing market model” through policy mechanisms that make private housing available to larger numbers of people, the report said. 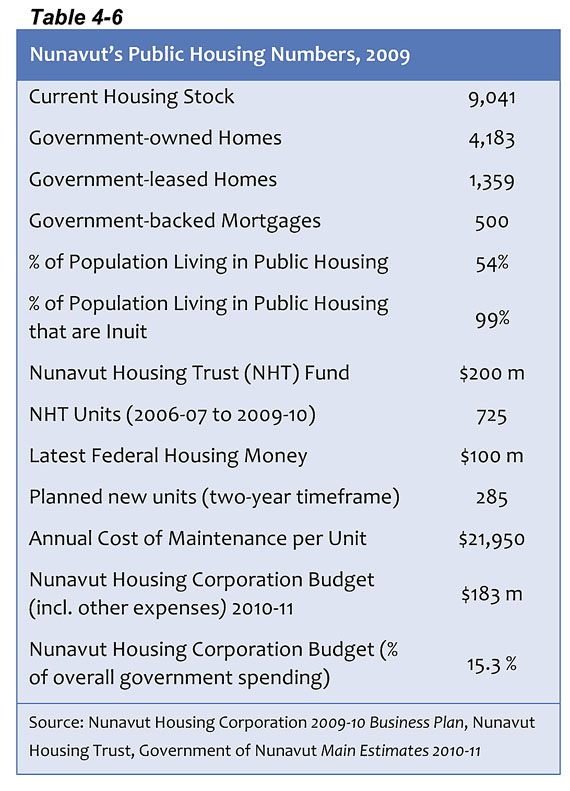 The numbers in this chart reveal Nunavut’s dependence on government-built and government-maintained housing. The average cost to government of maintaining a housing unit is $21,950 a year — so as more social housing is built, the financial burden on government increases. (SOURCE: 2010 NUNAVUT ECONOMIC OUTLOOK)