In violent crime, Nunavut is the national champion

Nunavut once again bucked Canadian crime trends this year, with Statistics Canada confirming July 20 what many Nunavummiut already know: that crime, especially violent crime, is getting worse in Nunavut.

The per capita crime rate in Nunavut is still three times higher than in Canada, says the StasCan report which annually surveys all criminal incidents reported to Canadian police services.

And, based on a new measurement, the crime severity index, Nunavut’s even worse, especially for violent crimes.

The severity of violent crime in Nunavut, according to data that analyzed the severity of about 200 types of criminal offences, is about six times worse that Canada’s and much worse than in the NWT.

StatsCan calculated the crime severity index for each jurisdiction by assigning a weighted score to each reported criminal offence, based on its severity.

In nearly every category of crime, Nunavut topped every other jurisdiction in the country

There were also increases in per capita rates of property crime, arrests for trafficking marijuana and other drugs, vehicle theft and impaired driving —which are all higher in Nunavut than in every other jurisdiction.

Nunavut also saw increases in the rate of crimes committed by youth, which was nearly five times higher in Nunavut than in rest of Canada.

Most crime rate numbers for the NWT were down, including for the overall crime rate. 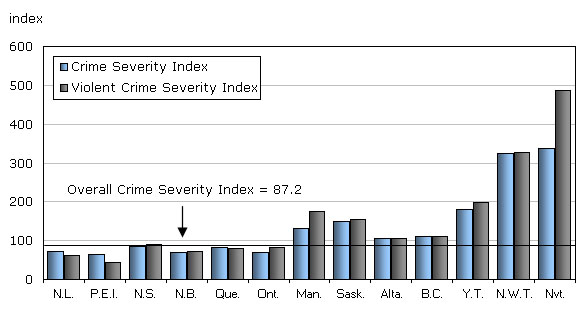 Nunavut overshadows other provinces and territories in one way: its soaring crime rate. The grey bar on the far right end of this graph shows that in Nunavut, the severity of violent crime is exceptionally high. (GRAPHIC HARVESTED FROM STATISTICS CANADA)