Nunavut committees use counseling and mediation 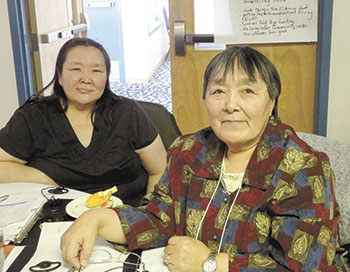 Mona Kaosoni of Cambridge Bay and Salomie Qitsualik of Gjoa Haven, who attended a meeting of justice committee members last week in Iqaluit, serve on their communities’ justice committees. (PHOTO BY JANE GEORGE)

Helping youth and adults who have gotten into trouble with the law is hard work, but you can see the results, says Salomie Qitsualik of Gjoa Haven, a long-time member of the justice committee in her community.

Last year, Gjoa Haven’s justice committee kept 15 offenders out of the court system, and the committee members likely kept others from committing crimes, due to their crime prevention activities in the community.

In Cambridge Bay, 25 cases, mainly involving youth whose offenses would have been dealt with in youth court, ended up in front of their community’s justice committee.

Unlike court, these committees use traditional counselling and mediation, instead of fines, conditions and imprisonment, to deal with offenders.

Justice committee members meet everyone involved in an offence, including the offender and the victims.

The outcome of these discussions may see the offender apologizing to the hurt party, meeting regularly with the committee or performing a community service such as hunting or fetching ice for elders.

To compare notes about what their community justice committees are doing, committee members, local workers, and specialists from around Nunavut met in Iqaluit last week.

This gathering marked the first time they had met to share their personal experiences in resolving and preventing problems.

One woman spoke about how she once resented an elder who would wake her up, telling her “we have a lot to do today.”

Today she recognizes the elder’s discipline was based on love and a desire to see her grow up to a useful member of the community.

“They used to scold us. I didn’t know it was for us to be good,” said another woman.

Others speakers noted that it’s important to be good role models and for parents not argue or oppose each other in front of their children.

Every community in Nunavut now has a justice committee, which kept 324 cases out of the courts in 2009.

Of these cases, the majority involved youth under 18.

Proof that these committees are having a measurable impact at keeping offenders out of trouble is hard to produce, said the GN’s director for community justice, Alan Hartley.

That’s because when people don’t offend again, they fall off the justice system’s radar.

So a better gauge of success of the community justice committees is the number of cases they see, said Hartley, who expects these numbers will go up: “the better we get, the better we’ll be.”

Although community justice committees have been around for more than 20 years, the Government of Nunavut has only recently begun to heavily in these justice committees, because it’s cheaper than building more courthouses and jails— and, at the same time, better for society, Hartley said.

Since 2008, and the adoption of Nunavut’s Family Abuse Intervention Act, the committees have received more money from Nunavut, which pays for the salaries of five justice specialists and 25 justice outreach workers as well as a small remuneration for justice committee members.

Generally, justice committee members meet only once or twice a month. When they meet, it’s often to deal with offenders referred by the RCMP or the court or to help plan crime prevention activities.

Before being referred to the committee, offenders must accept responsibility for their actions and show a willingness to work with the justice committee members.

Even so, they can decide to accept or refuse a referral, a choice usually based on whether or not they feel they can help.

During their initial meeting on a referral, committee members try to understand what happened. The chairperson reads the police report, then the members speak with the offender to find out what happened and why.

They may offer counselling and consider what they can do to help “heal the situation.”