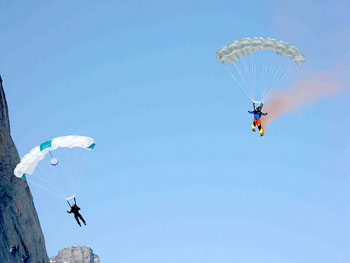 The Government of Nunavut hopes that trendy tourism offerings like base-jumping, seen here off steep cliffs near Clyde River, will make up for the loss of polar bear sport hunting revenue. (PHOTO HARVESTED FROM SPORTTOPO.COM)

A gap as wide as an impassable lead in the ice still separates Baffin Bay polar bear hunters from Government of Nunavut officials.

“All the communities were mad,” Awa said in a recent interview. “Some of the attitude was quite negative and appeared to be threatening.”

The officials’ mission during their community tour, done during the week of March 22, was to sell hunters on the idea of reducing the Baffin Bay polar bear quota by 10 animals a year over the next four years to allay scientific and international concerns about population numbers and management.

The GN also used the tour to promote its economic development programs for outfitters affected by these cuts and to introduce two new programs:

• a wildlife stewardship program to pay local groups who want to carry out wildlife research;

• and a program to cover repairs to cabins damaged by polar bears.

The community’s Nangmautaq Hunters and Trappers Association has said its members will continue hunting up to their old quota of 45 polar bears unless they get $25,000 in compensation for each polar bear deducted from the GN’s new quota, 20 new hunting cabins, electric fences, more monitoring and year-round hunting.

To Clyde River outfitter Levi Palituq, who attended the public meeting in his community, it seemed as if older hunters and government officials just couldn’t see eye-to-eye on how to work together.

“It’s not about us. It’s about our kids, our grandchildren,” said Palituq in an interview. “If we want polar bears 20 years from now, we’re supposed to be doing this.”

But Palituq acknowledges he will suffer financially because of the quota cuts, which follow a federal government ban on the export of trophies from the Baffin Bay polar bear population.

The European Union and the United States have each banned the import of polar bear trophies from Baffin Bay.

And since Jan. 1, 2010, Environment Canada has also banned the export from Canada of fur, claws, skulls and other products from polar bears harvested in Baffin Bay — another blow to the local sport hunt.

As a result, Palituq’s polar bear outfitting business has dropped from five clients in 2009 to three this year, who include no wealthy Americans, Europeans or Russians.

All Palituq said he will see this April is “a lousy three [hunts] with three cheap Canadians,” who aren’t willing to spend as much for the hunt.

The drop in revenues means Palituq won’t be able to hire as many local guides.

“It’s affecting other people in town who are relying on me to make some money in a very short tourism season,” he said.

Although Palituq is fortunate to have 100 base jumpers, skiers and climbers lined up for this season, these adventure tourists won’t produce the big revenues produced by polar bear sports hunters.

“There’s nothing compared to a lucrative polar bear hunt up here. A good season with well-paying clients in the polar bear sport hunting industry against having climbers, base jumpers, dog sledders, they don’t even compare,” he said.

Palituq is even thinking of getting out of outfitting because the business is getting harder and more expensive to run.

“I don’t like it because I feel as a Nunavut resident. I feel that I should be able to go to my government and ask them for help, but I can’t,” he said.

As a business, the sport polar bear hunt is a recent development that began only about 30 years ago. But it’s become increasingly important, socially and economically, for many hunters.

The Northwest Territories first encouraged outfitters to get involved in the polar bear sports hunt as a reponse to the declining seal pelt market in the 1980s, researcher George Wenzel of McGill University found.

Unpublished records from Clyde River cited by Wenzel in his 2005 paper, “Nunavut Inuit and Polar Bear: The Cultural Politics of the Sport Hunt,” show only one sport hunt taking place between 1955 and 1970, involving an American military officer visiting the U.S. Coast Guard station at nearby Cape Christian.

Until this year, about 10 polar bear sports hunts took place every spring in Clyde River.

The income that hunters can obtain through by sport hunters is critical because it helps them buy hunting equipment.

And often these hunter-guides lack the education and linguistic skills to take on other well-paid jobs, Wenzel said.

Local outfitters receive between $18,000 and $30,000 for each polar bear sport hunt, depending on whether the hunts are booked directly or through southern outfitters.

So the money going to their guides— about $7,300 per hunt— offers “considerably larger sums of scarce money” than is possible through the sale of furs or ecotourism, Wenzel says.

Hunters who will be out thousands of dollars in 2010 are among those who are hurting now.

Some hunters are upset with the GN because they recall how the NWT created “special community assistance” payments that helped with the loss of revenues when polar bear quotas were cut.

The GN does not plan to offer a similar program.

At the same time, hunters have threatened to continue hunting as many polar bears as they want, despite the quota cuts, because they see more polar bears near their communities, rather than fewer.

But a threatened revolt by hunters doesn’t trouble Awa.

“They will comply,” Awa said. “In the Inuit way, you don’t really retaliate. Even though they say they will hunt as they please, I don’t think that will happen.”

To improve relations, the GN plans to do more public education about the co-management process that’s spelled out in the Nunavut land claims agreement.

The GN will also work with Greenland on its management of the Baffin Bay’s shared population.

And there are plans to carry out a new population survey over the next four years. This may resolve the dispute over the number of polar bears or what the harvest quota should be.

“I am always positive that in the short term the reduction is going to hurt, and will hurt, and has already hurt the communities, but in the long term it might be more positive, even after four years,” Awa said.