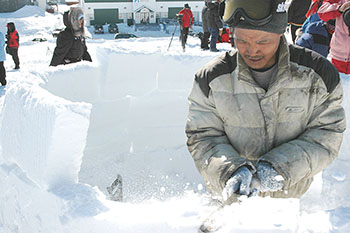 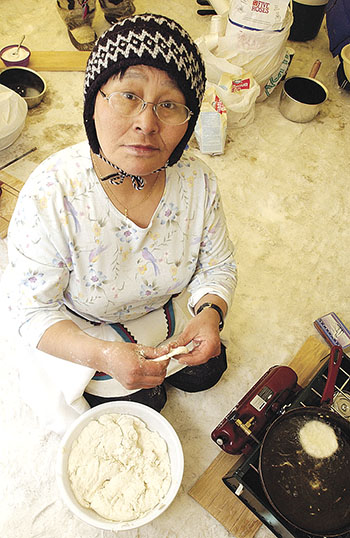 A woman takes part in a bannock-making competition during the 2003 version of Toonik Tyme in Iqaluit. (FILE PHOTO)

You don’t have to wait until Toonik Tyme, Iqaluit’s annual spring festival officially kicks off on Wednesday April 7 for the fun to start in the city.

You can savour the sweet taste of maple taffy on snow at the francophone centre, which will serve up this traditional Québécois treat at its sugar shack from 11 am to 2 pm on April 3— at a cost of $15 for adults and $7 for kids.

Or you can cheer the Toonik Tyme minor hockey tournament games at the Arnaitok Arena.

In the evening of April 6, a “North of 60 Idol Talent Competition” is scheduled to start at 7 p.m. inside the the Storehouse Bar and Grill.

Last year nearly a dozen performers, including traditional throat-singers, competed for the top prize of round-trip tickets to Ottawa via Canadian North.

This year, local judges, including Iqaluit singer-songwriter Karen Mackenzie, will be on hand to judge the wannabe idols.

All contestants will win a prize, and the admission charge of $2 will be donated to Iqaluit’s children home, said, Terry Dobbin of Nunavut News, which sponsors the event with Canadian North.

Another pre-Toonik Tyme activity has been designed for kids up to the age of 10, who can submit their finished Toonik Tyme colouring sheet of a dog team and driver by April 9 for display and prizes.

And if you’re feeling lucky, buy a $10 ticket to the “Giant Toonik Draw” at the Northmart or city offices — but you won’t find out whether you’ve won a prize or not until the April 12 closing ceremonies of Toonik Tyme.

When Toonik Tyme started in 1965, the festival was more modest in scale, consisting of traditional Inuit games, throat singing and dancing, a community feast and an evening of dancing and music at Toonik Lake.

Now, in its 45th year, Toonik Tyme charges admission for many events and features a lots of less traditional activities such as the television-inspired “Fear Factor” competition.

This popular event has seen competitors in past years chewing and later wading through country food discards mixed with earthworms and fish blood.

Toonik Tyme officially kicks off Wednesday, April 7, with a kids’ pool party, kids’ outdoor skating party, elders’ bingo in the afternoon at the elders’ qammaq and snowmobile drag races for men and women out on the sea ice.

In the evening, the opening ceremonies ($2 admission for all exception of elders and youth under 12) include a traditional clothing fashion show and the naming of the Honorary Toonik, who serves as chairperson of the festival.

“Our first Toonik was an Inuk from Cape Dorset, his name was Atchealak… he used to be my clerk at the Hudson Bay Company, a real handyman he was, always around to help out… he dressed up in caribou furs and came over the hill by dog team… It was really quite dramatic and exciting with all the Inuit dancing and music,” said Gordon Rennie, who was himself chosen as the honorary Toonik for 1970.

In the early years of Toonik Tyme, this honour was often given to a distinguished guest invited to preside over the week’s festivities.

The ranks of past honorary Tooniks include former prime minister John Diefenbaker, Prince Charles, former governor-generals and former commissioners of the Northwest Territories, a former premier of Greenland and a former mayor of Nuuk.

In more recent years, the honorary Toonik award has gone to an individual who considered to be “an outstanding volunteer and demonstrates exceptional community spirit,” such as elder Inuapik Sageaktook, the 2009 honorary Toonik.

These activities are followed by a $15 per person fund-raising stew and bannock dinner for St. Jude’s rebuilding committee in the Anglican Parish Hall, and the “Fear Factor” event, held at the curling rink where doors open at 5:30 p.m., with admission free for elders, $2 for ages six to 12 and $5 for adults.

Teen games are scheduled for the youth centre.

And for those who still have energy to spare, there’s a $2-a-head northern band show at the Cadet Hall.

Friday, April 9, a holiday for city and government of Nunavut workers, brings golfing to the Toonik Lake across from the Arctic Games Arena, preschool games, a kids scavenger hunt, an elders craft fair at their qammaq.

Igloo building and tea and bannock-making competitions are planned for the afternoon as well as a kids’ hockey tournament, adult scavenger hunt and an uphill climb.

For more information about the schedule for the evening of Friday, April 9, and on through April 12, when Toonik Tyme wraps u, consult next week’s Nunatsiaq News or go to the official Toonik Tyme website at www.tooniktyme.com.