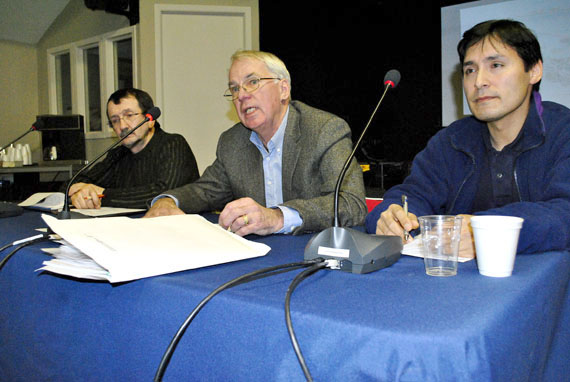 The three members of the Nunavut Electoral Boundaries Commission take questions from reporters Jan. 11, at what was supposed to have been a public hearing: Gordon Main of Arviat (left), Justice Ted Richard of Yellowknife (centre) and Kirt Ejesiak of Iqaluit. (PHOTO BY JIM BELL)

When you’ve just agreed to a tough job and you know you can’t please everyone, there’s just one possible response: “we will do the best we can.”

That’s how Justice Ted Richard, chair of the Nunavut Electoral Boundaries Commission, describes the task that faces him and his two co-commissioners, Gordon Main of Arviat and Kirt Ejesiak of Iqaluit, when they sit down to redo the Nunavut legislative assembly’s electoral map.

The commission must recommend the total number of constituencies, their boundaries and their names. They are to submit a report by June to Nunavut MLAs, who will make the final decision.

“It’s a challenge. There’s no doubt it’s a challenge. Life is not perfect,” Richard told reporters this past Jan. 11 at what was supposed to be a public hearing in Iqaluit.

But after no one showed up to make submissions, the commissioner used the time to take questions from Iqaluit-based reporters.

Richard said he already knows that many residents, especially those living in smaller places, still want a legislature in which each community gets its own MLA, a popular idea in a territory where only 33,000 people are scattered over two million square kilometres with 24 mostly tiny communities.

Under the constitution, no constituency is allowed to become 25 to 30 per cent greater or smaller in population than the average.

This, Richard said, is to preserve equality of voting power for all residents, whether they live in large or small communities.

The only exception is Sanikiluaq, which because of its extreme distance from Nunavut and extreme isolation, automatically gets its own MLA under a special rule written into the Nunavut Elections Act.

But the commission cannot consider any other exceptions, Richard said.

“Every community is not going to get their own MLA. If Grise Fiord get its own MLA, then we’re going to have 60 MLAs in the legislature, because citizens in Iqaluit are entitled to their constitutional right to relative equality of voting power,” he said.

Equality of voting power is the issue that triggered the formation of Richard’s commission.

Sandy Kusugak, the chief electoral officer, found in her last post-election report that three constituencies were out of whack: Amittuq (Igloolik and Hall Beach), Iqaluit East and Rankin Inlet North.

Two of them, Amittuq and Iqaluit East, are now too big.

Rankin Inlet North is now too small, Kusugak said in her report. The total number of eligible voters listed there is 34 per cent fewer than the average.

Under Nunavut’s elections law, MLAs were then required to create a commission to review electoral boundaries.

Besides rebalancing boundaries, the commission will likely ponder another longstanding problem: the awkward Akulliq seat, made up of Repulse Bay and Kugaaruk, which straddles the Kitikmeot and Kivalliq regions.

The Kitikmeot Inuit Association, every year since 2006, has passed resolutions calling for Akulliq to be eliminated.

And this past Oct. 6, John Ningark of Kugaaruk, the sitting Akulliq MLA, told KIA delegates at their annual meeting that he will fight to change the boundaries of the riding.

That’s because, to get from one community in another in Akulliq, the MLA must make a lengthy trip requiring two one-night stopovers in Rankin Inlet and in Yellowknife.

To fix that, most Kitikmeot leaders want Taloyoak and Kugaaruk combined to form one seat and to create a single seat out of rapidly growing Gjoa Haven.

But to deal with that and other problems, the commission is reluctant to simply increase the number of seats.

“In the few discussions that we’ve had among ourselves on the big picture, we’re agreed that’s it’s not a solution to just keep on expanding the legislature by saying yes to everybody,” Richard said.

So the best way to deal with the Iqaluit East problem may be to move the boundary a few blocks to put more people into one of the other two Iqaluit seats, each of which have smaller numbers of voters.

As well, Gordon Main said the commission is “trying to save the taxpayers’ dollar as much as we can.”

To that end, the commission will hold hearings only in communities where people have asked them to come.

This past November, Richard sent letters to all mayors and municipal councils to ask if they want the commission to hold hearings in their communities.

One was Iqaluit City Council, which also wanted a private meeting with the commission to talk about the idea of creating a single constituency for the city with three members elected at large from one list of candidates on a single ballot.

But the commission will not do private meetings or consider anonymous communication, Richard said.

“If the mayor of community X wants to communicate a message to the commission, he or she can put their name on a document and send it in. Or come to a public meeting and stand up and let the public hear what they are saying. We don’t do private meetings one-on-one. It’s public,” he said.

No one from Iqaluit City Council, which also met that evening at the same time, appeared to make a submission Jan. 11.

“We organized the meeting and told them when it would be some time ago. We can’t explain why they are not here,” Richard said.

But he did say the commission would consider a single-constituency for Iqaluit, but only if they receive a detailed submission.

He warned, though, that MLAs have given the commission a mandate that specifies a one-seat, one-member rule.

“I’m more concerned that we really don’t have anything in our mandate but to recommend one MLA per constituency. It’s problematic. I would rather that those who propose it be sitting here,” Richard said.

This past week, the commission held hearings in Iqaluit, Qikiqtarjuaq and Kimmirut.