Cambridge Bay struggles with its challenges 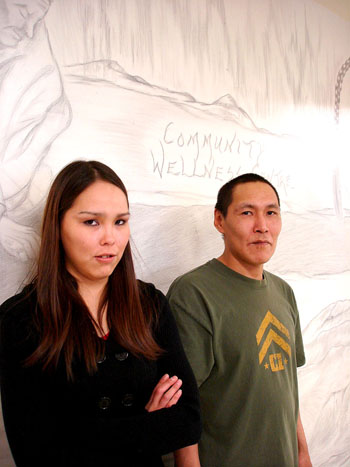 Like many in Cambridge Bay, Nick Panioyak and Demetra Panaktak, who work at the community’s wellness centre, have no real home to call their own. But somehow the two manage to show up at work every day. (JANE GEORGE) 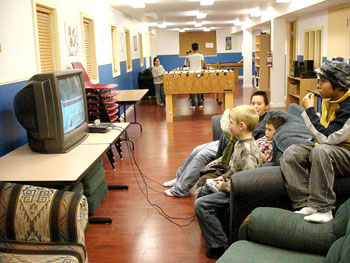 Kids in Cambridge Bay now have their own youth centre, open since last May, where they can stay safe and warm. (PHOTO BY JANE GEORGE) 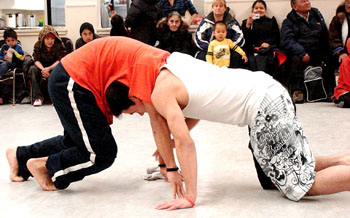 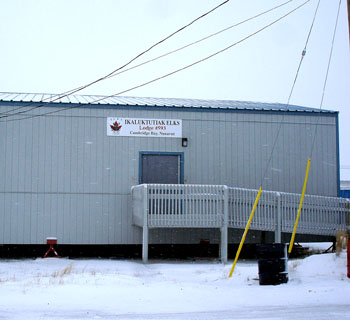 The Ikaluktuktutiak Elks Club, which sells beer for $7 each, enforces strict rules on its premises and hands over thousands of dollars a year to local organizations. (PHOTO BY JANE GEORGE) 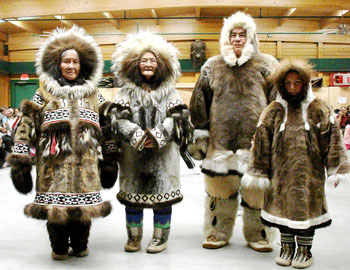 If you surf the Internet looking for information on the western Nunavut community of Cambridge Bay, you’ll likely learn about its frequent blizzards or the triple homicide of 2007.

But you’ll miss out on the warmth and determination shown by many residents who want to help their community of 1,500 become a better place.

These can only be experienced face to face.

With the wind chill hovering around -30 Celsius, hundreds of people, from newborns packed on their mothers’ backs to elders, show up the Luke Novoligak community centre for nightly entertainment during the Kitikmeot Inuit Association’s recent annual general meeting.

People in the audience clap wildly for the local Innuinait drum-dancing group who shake the centre with their drumming, singing and stamping.

Everyone cheers as young athletes try Inuit games, such as the head-butting “muskox fight,” and many don Mother Hubbard-style parkas and outerwear of caribou, seal, dog and siksik fur to compete in a traditional fashion show.

These events, says the KIA program coordinator, Julia Ogina, are about sharing culture and good times with their families and friends. People tell her they leave the festivities feeling stronger and more confident.

Yet while Cambridge Bay keeps one foot in the past, many focus on its future, specifically, to Dec. 14 when residents are to vote for a new mayor and hamlet council, and beyond that to when they hope Cambridge Bay will become home to a new High Arctic research centre.

Some are also already looking to February, 2011, and another plebiscite on whether to put more controls on alcohol.

For the moment, there’s no shortage of problems to drain energy from these plans.

The RCMP’s six-member detachment has its hands full dealing with more than 2,000 calls a year and will have detained about 700 people for shorter or longer periods by the end of 2009.

Included in these numbers are numerous assaults, many charges for mischief, which police say generally occur when partying gets out of control, and numerous break-ins and acts of vandalism committed by youth wandering the streets all night.

Most of the offenders have drunk way too much and feel ashamed when they wake up in jail, Sgt. Charlie Gauthier said.

Alcohol is behind nine of every 10 calls received by the RCMP, Gauthier says.

A steady stream of alcohol flows into the community from Yellowknife, ordered by residents who drink it themselves or sell it, charging up to $300 for a 60-ounce bottle of vodka.

As for drugs, you can buy anything from pot to ecstasy.

Home brew can also be found in many of the homes on a section of street nicknamed “Home Brew Alley.”

The beer-like brew produced by some there is potent, about 15-proof, and, when drunk too early in the brewing process, it can cause blindness.

Cambridge Bay is also home to an Elks Club. The club admits local people — who haven’t paid the $175 a year membership fee — every Friday night after 8 p.m. for $5 a head, $7 a beer.

“I don’t see a problem” with the volunteer-run, do-good Elks Club, says its “exalted ruler” Wilf Wilcox, who has been sober for three years.

On the Elks’ pub night, people wait in line outside in frigidly-cold temperatures for an hour or more to snag one of 65 places in the clubhouse. With no music, no dancing and bright lights, the atmosphere is more canteen than nightclub, and shuts down at 11 p.m.

But then many then head off for more drinking at house parties.

Cambridge Bay also has a private poker club called Tripps, run by Syd Glawson, the acting mayor, who applies weekly for a permit to hold the games.

Both the Elks and Tripps give thousands of dollars every year to charitable efforts in town.

Most point to the abuse of alcohol and drugs in the home, along with late-night gambling parties, as the major cause of misery in this community — and even death, as was the case last month when an young mother appears to have choked to death late at night while eating a piece of raw caribou.

But the worst problem by far is the lack of social housing, says Marie Ingram, director of the Wellness Centre.

The Wellness Centre, which offers courses in parenting and “addictions, relationships and the good life,” also provides a safe haven for the many residents who spend their days going from home to home.

At the centre, they come to wash their clothes or drink tea and eat bannock in the common room. There’s also a food bank and a clothes exchange room, all supported by donations.

While Ingram doesn’t deny alcohol, drugs and gambling are problems, she says the shortage of social housing worsens conditions to the crisis level.

Homelessness keeps some families out in their cabins, so the kids end up missing school.

Staying in overcrowded housing makes it hard to sleep when there’s a party going on so people sleep through school and work.

And this also contributes to the growing number of offenders who can’t respect their undertakings to stay away from booze and end up back in jail.

Maintaining sobriety, holding a job or dealing with other issues is near impossible under these conditions, Ingram says.

“If you don’t have your own home, you have no control over your life,” she says. “The government made this situation by moving people to this community, now they should solve it.”

Nick Panioyak, a janitor at the Wellness Centre, considers himself to be homeless. He lives at a relative’s overcrowded apartment.

He’s farmed his teenaged kids out to another family member, and on weekends, he wanders from one friend’s home to another to escape being around drinkers.

Demetra Panaktak, who also works at the centre, shares a one-bedroom unit with four other family members, spanning three generations. With no privacy, she dreams someday of having her own place.

As for Panioyak, he says he’s number two on the list after waiting for housing for three years. Maybe he’ll have a crack at one of the new units being built in town.

But there’s a potential problem here: the brand-new manager of the Cambridge Bay Housing Association, Wayne Horsman, says he has no idea how many names there are on the waiting list for social housing and he can’t say how new units are going up.

The association’s finances are also in disarray, sources told the Nunatsiaq News.

While there’s no clue about when the housing crisis will ease, some controls on alcohol are likely to come in February, 2011, when Cambridge Bay can hold another liquor plebiscite.

The last vote in 2008 to whether give more powers to its inactive alcohol education committee was shot down.

But Glawson, who became mayor when Michelle Gillis, the former mayor manager of the housing association resigned and left town, said that if he’s re-elected Dec. 14, he would push for a simple question and more community involvement in the next vote.

The hamlet has already asked residents for input about whether they think Cambridge Bay should have an alcohol education committee and controls on alcohol, and has called a public meeting on Nov. 24 to discuss “wellness issues” in the community.

Alcohol has been in Cambridge Bay even longer than Glawson, who has already seen the closing of a members-only DEW-line bar and the suspension of beer sales at the former Hudson Bay Co. store.

People in Cambridge Bay now need to step up and say “you can do it,” and stop bootleggers, he says.

“We’re not going to eliminate alcohol, but we’re going to try to control the influx to individuals who sell it,” Glawson says, taking aim at local bootleggers who appear to operate openly in the community.