“We know that there is important work yet to do” 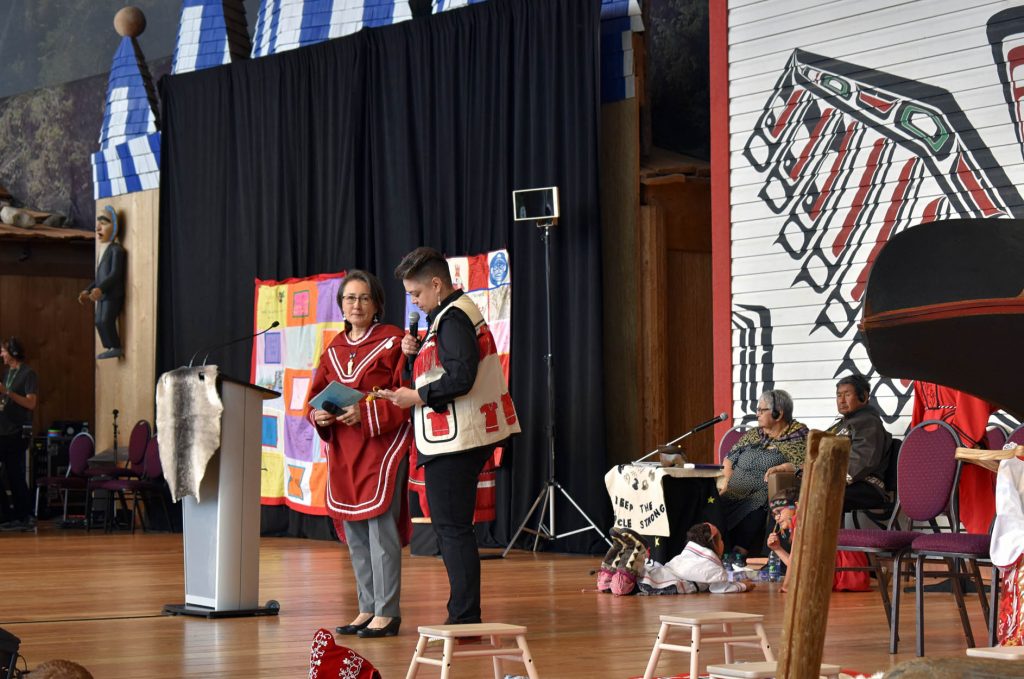 Lisa Koperqualuk, left, and Valerie Courtois co-host the closing ceremony of the National Inquiry into Missing and Murdered Indigenous Women and Girls on June 3, 2019, at the Canadian Museum of History in Gatineau, Que. (Photo by Kahlan Miron)

The federal government has pushed back the release of an action plan being drafted to respond to the findings of the National Inquiry into Missing and Murdered Indigenous Women and Girls.

The inquiry released its final report last year on June 3, concluding that Canada’s brutally high rates of violence against Indigenous women amount to a form of genocide, rooted in deliberate, ongoing human and Indigenous rights violations.

The report made 231 recommendations or calls to justice.

Crown-Indigenous Relations Minister Carolyn Bennett reportedly told an Assembly of First Nations event last December that her government planned to deliver a response via a national action plan in time for the report’s one-year anniversary.

Work towards that plan, which is being co-developed with a number of Indigenous groups, is ongoing, Bennett’s office said on May 27, but it will take more time.

“While virtual discussions are ongoing, the COVID-19 pandemic has presented unique engagement challenges for everyone involved in this process,” Bennett said in a statement emailed to Nunatsiaq News on May 27.

“We know that there is important work yet to do,” she said. “We are grateful for the work of all partners especially the leadership of [Pauktuutit] president Rebecca Kudloo and Nunavut’s Minister [responsible for Status of Women] Elisapie Sheutiapik in ensuring we get this right for Inuit survivors, families and communities across the Nunangat.”

Bennett did not suggest when the action plan might be released.

In a May 27 post to social media, Nunavut MP Mumilaaq Qaqqaq said she was upset by the delay.

“This isn’t news, this is something that should have been worked on for the last year,” she said. “And here we are again seeing more delays.”

“Why are we continuously trying to justify that our lives are as valuable as anyone else’s?”

As part of its work, Crown-Indigenous Relations says the government has already made headway to address some systemic issues flagged in the report, through legislative reforms of the child and family services systems (Bill C-92), Indigenous language protection (C-91) and amendments to the Criminal Code to toughen penalties for domestic assault.

The report included 46 Inuit-specific recommendations. Among them are calls for governments to honour land claims and their socioeconomic commitments to Inuit, for the creation of laws and services to protect Inuit culture, and for the recognition of Inuktut as an official language in Canada.