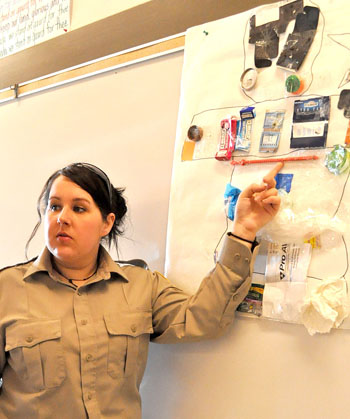 This display of trash picked up around Kugluktuk offers Charlene Beanish, the Kitikmeot’s environmental protection officer, a chance to tell young students about the “three R’s” of energy conservation— that is, to reduce, reuse and recycle. (PHOTO BY VANESSA MOSEK)

As the snow melts around Nunavut, a year’s worth of litter is emerging in gullies, streets and around houses.

A warm spell in Kugluktuk last month uncovered candy wrappers, chip bags and pop cans around the community’s two schools, which prompted Charlene Beanish, the Government of Nunavut’s environment protection officer for the Kitikmeot, to organize a cleanup.

On Earth Day, April 22, students donned gloves and grabbed bags to pick up trash around their schoolyards: the result of their efforts was beautiful, Beanish said.

Along with local conservation officers, Beanish also plans to help organize a community-wide cleanup this July— similar to other cleanups slated to take place throughout Nunavut.

“[Community] environmental issues are so overlooked, not just here but all over Canada,” Beanish said.

Since her arrival in Kugluktuk last fall, Beanish has tried to raise more awareness among kids about the need to litter less, conserve more energy, and recycle.

Beanish met last month with classes at the elementary school where she offered a crash course in the “three R’s” —how we can reduce the amount of waste we produce, reuse an item or find someone who can use it, and recycle products so they’re used again and again.

When speaking to the students, Beanish came armed with a poster of littered objects she picked up around Kugluktuk. This eye-catching display provided a chance to talk about not littering.

“If you take a plastic cap off a bottle, and the wind takes it and blows it into the water, a seal may mistake that for food and the seal could choke—the kids had never thought about it that way,” Beanish said.

Explaining the need to cut down on paper use and save trees was more challenging. That’s because some of the students didn’t realize paper came from trees or hadn’t even seen trees- which only start to grow about 50 km south of their community.

To show what can be done to recycle, Beanish brought in a bag made of flattened foil juice containers, which her grandmother had stitched together.

As to why it’s important to reuse and recycle, Beanish chose the example of a glass bottle— explaining that if it’s recycled, the energy saved is the same as it takes to power a computer for 20 minutes.

Reusing and recycling can also mean passing things around, she told the classes.

“And are shoes recyclable? They actually are, because you can pass them on to your younger brothers and sisters,” she said.

Students also made their own fossils out of used coffee grounds and flour, mixing up this mixture, before various objects pressing and setting their imprints to dry.

The presentations and activities appeared to have an impact, Beanish said. Since then, students have been overheard urging their parents to buy cloth bags instead using plastic bags. Others are saving foil juice containers for a bag like the one she showed them.

As a next step, Beanish plans to develop a similar community environmental awareness program for high school students— and then bring these programs to schools in the Kitikmeot’s other communities.

Education isn’t the most important part of Beanish’s job— she’s is also on standby for any environmental incidents on territorial land.

At this time of year, she’s involved in oil tank inspections and evaluating spills from tanks that may have developed small holes after being frozen all winter.