IFAW dog rescue did not occur in Kuujjuaraapik

“I’ve never met this group before” 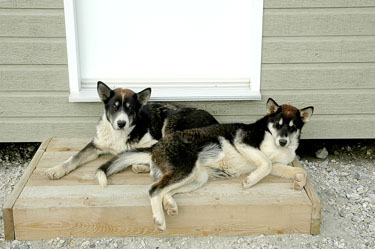 An animal welfare group recently rescued 36 stray dogs from a northern Quebec community — but it wasn’t Kuujjuaraapik and probably wasn’t in Nunavik. (PHOTO BY SARAH ROGERS)

The community of Kuujjuaraapik says it feels singled-out after a July 27 article in the National Post mistakenly targeted the village for its practice of shooting stray dogs as a way to control the local population.

The National Post was reported on the efforts of an animal rights group called the International Fund for Animal Welfare, which recently rescued 36 dogs from an unnamed village in northern Quebec that probably isn’t located in Nunavik.

The newspaper interviewed Pierre Roussel, a Kuujjjuaraapik municipal administrator, who admitted that stray dogs are sometimes culled when dogs pose as a threat to residents’ safety.

But Roussel says no one from IFAW visited his community— as far as he knows.

“I’ve never met this group before,” Roussel told Nunatsiaq News . “If they were here, they never contacted us or asked for assistance.”

Targeting Kuujjuaraapik for practicing dog culls is unfair, Roussel said, because it happens all over the North, where few communities have access to veterinary care.

The rescued dogs did not, in fact, come from Kuujjuaraapik — but IFAW chose not to name the community the dogs were taken from.

“We purposely didn’t name it so as not to stigmatize the community,” said IFAW’s Jan Hannah. “People tend to point their fingers at northern communities. Whereas we [in the South] have all the tools we need and we’re still unable to deal with the problem. Our shelters are full.”

When the IFAW heard of an organized cull in advance, they were able to travel to the village and remove 36 dogs, with the permission of community leaders.

Those dogs were flown south to shelters in Ontario and the United States, where they will be put up for adoption.

Finding new homes for stray dogs is only a tiny part of the work IFAW does, Hannah said — and the most recent “rescue” was one of the largest the organization has ever done.

Hannah said IFAW prefers communities to come up with their own model for how they want to manage their dogs.

The cull can be humane, if done appropriately, she said,

This year in Kuujjuaraapik, Roussel said they’re paying to fly in a veterinarian this year to sterilize female dogs.

“We don’t take dogs away to be shot all the time,” he added. “We respond to calls when there is a safety issue.”

In Nunavik, a number of animal welfare groups have already teamed up to try and bring better veterinary care to the region’s 14 communities.

Nunavik’s Veterinary Public Health and Animal Health Support Project is an initiative of the University of Montreal’s veterinary program which, along with other animal welfare groups and regional partners, hope to bring a mobile vet clinic to the region by 2012.

The IFAW has been invited to join the Nunavik initiative, which Hannah said is so comprehensive that her group may decide to focus on other regions that lack support.

In the meantime, Nunavimmiut can get free advice on animal care through the University of Montreal’s veterinary college at (514) 345-8521 extension 0065 or by email at nunavik-giv@medvet.umontreal.ca.