“Nunavut teenhood, in a frozen and depressing nutshell” 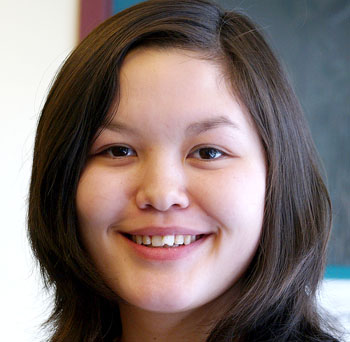 Angnaluaaq “Tia” Friesen, an 18-year old nursing student from Iqaluit, has started a Facebook group calling on Vice Magazine to pull a web-log story about teenage life in the Nunavut capital. (PHOTO BY CHRIS WINDEYER)

Some young Iqalummiut are miffed at an American magazine article they call “very insensitive” to Iqaluit.

The story ran on the website of the New York-based hipster magazine Vice.

“What if it was -50C outside, booze and drugs are almost triple what they are in the rest of the country, and a bunch of your friends committed suicide because they got dumped?” the story reads. “That’s Nunavut teenhood, in a frozen and depressing nutshell.”

The piece also describes the smell of maktaq as “sweet, rotting, flesh-garbage” and claims that kids go snowboarding “in tank tops when it’s –35 C and get sunburned.”

Friesen said the Vice story serves as an introduction to Nunavut for some southerners, and while the article has streaks of truth throughout, it’s insulting to imply that all teens ever do on weekends is get wasted.

So Friesen’s started a Facebook group calling on Vice to pull the story. It’s attracted more than 130 members in under a week.

Vice Magazine originally started as a newspaper-style publication in Montreal in the mid 1990s, and later moved to New York City.

Among other things, the magazine has published an “interview” with a piece of pasta, instructional stories on how to perform oral sex and a photo of an old man in purple tights urinating on himself.

Vice has also written about social issues, politics and war in a decidedly offhand style.

Lauren Solski, 19, who lived in Iqaluit from the age of 11 until she was 17, said the article is sloppy journalism. The story, she said focused on the negative and was insensitive to Iqaluit’s social problems.

“Vice Magazine… claims to be lighthearted and not necessarily following the journalistic values,” said Solski, who’s studying journalism at Ryerson University in Toronto. “It just came off the wrong way because it was just treated without any sensitivity whatsoever.”

Solski, along with several other current and former Iqalummiut, is depicted in several photos that run with the story, which appear to have been harvested from Facebook. She’s not pleased with that either.

An email to Vice seeking a comment for this story got no reply. Solski said she’s written emails to several staff at the magazine and has also received no reply.

Friesen said the ultimate solution lies in young Nunavummiut telling their own stories via the arts, making their own movies, journals and books.

“I think Nunavut can slap itself in the face instead of having someone else do it,” she said.

“Maybe this might be a way for us to learn from this and to see how other people don’t see, help them realize what Nunavut is.”