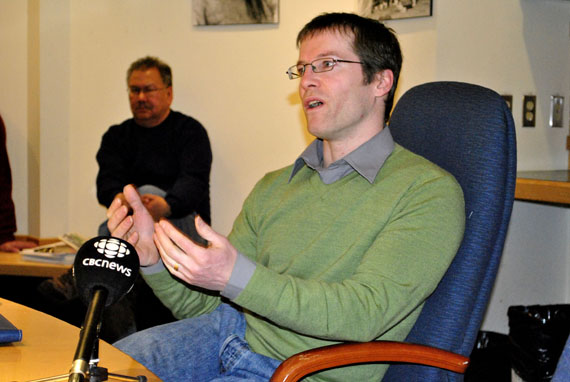 Economist Graeme Clinton, the author of the 2010 Nunavut Economic Outlook, said economic growth over the next five years will nurture a growing Inuit middle class, but the gap between rich and poor will continue to plague the territory. (PHOTO BY JIM BELL) 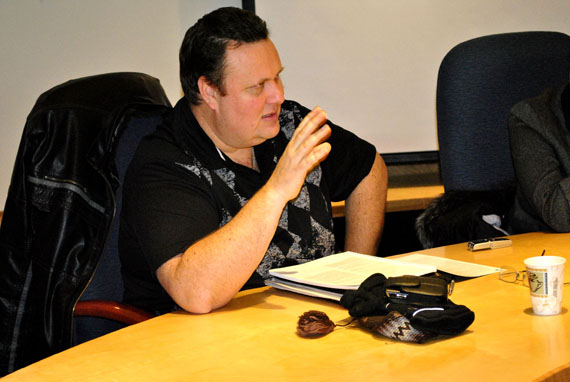 Hal Timar, the executive director of the Baffin Regional Chamber of Commerce, said all Nunavut businesses struggle to employ enough people who are capable of participating in the territory’s growing economy. (PHOTO BY JIM BELL) 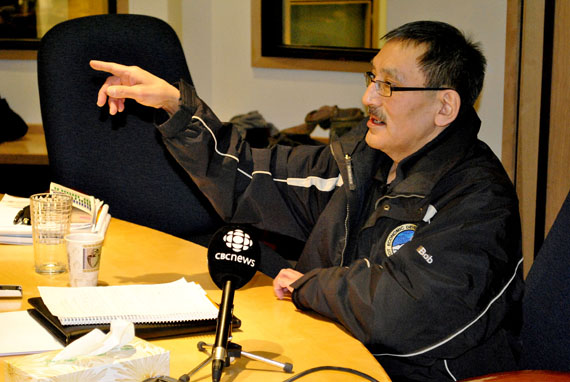 Bob Aknavigak, the chair of the Nunavut Economic forum, said Inuit impact and benefit agreements are designed by regional Inuit associations to provide mining-related benefits primarily to people living in the same regions as the mines. (PHOTO BY JIM BELL)

The global recession gave Nunavut an extra two years to prepare the territory’s population for mining-driven economic growth and find ways of closing the growing gap between haves and have-nots, the 2010 Nunavut Economic Outlook finds. (See the document embedded at the bottom of this page.)

“We’re essentially back to where we were at the beginning of 2008, so the second chance is coming really fast,” Graeme Clinton, the Yellowknife-based economist who wrote the report, told reporters.

This outlook report, the first since 2008, found that in 2009, Nunavut’s gross domestic product — the total value of all goods and services produced — fell by 10.6 per cent.

This was mostly due to the end of construction at the Meadowbank mine and a big drop in mineral exploration, the report found.

But this year, the territory’s economy will bounce back with a vengeance.

“There is no more debate on whether Nunavut should or should not have mining. The fact of the matter is the economy is growing and it’s [because of] mining,” Clinton said.

The Kitikmeot and Kivalliq regions will feel this growth first, because of the imminent development of new mines in those regions by international firms such as Agnico-Eagle, Newmont and Areva.

“Many Nunavummiut will benefit from this change. Some will be made very wealthy, but more noticeable will be the emergence of a larger Inuit middle class,” the report said.

But at the same time, the rise of this new middle class highlights a big problem: the large proportion of Nunavummiut who don’t have the skills, interest or ability to participate in the mining economy, or who live in places untouched by economic activity.

“This is contributing to a greater separation between rich and poor in Nunavut and stands in the way of a high and sustainable quality of life,” the report says.

That’s why the recent recession may have been a good thing, the report says. It created more time for Nunavut to create policies programs aimed at reducing the extent of that problem.

Hal Timar, the executive director of the Baffin Regional Chamber of Commerce, suggested that businesses will continue to struggle to find enough skilled workers.

“The problem is and will continue to be accessing this wealth. The smallest businesses up to the very biggest businesses are challenged to employ enough people so they can benefit from this,” Timar told reporters.

Clinton noted that in 2009, a year when Nunavut’s economy shrank 10 per cent, the Government of Nunavut’s Tamapta mandate did not talk about economic growth.

He said he doesn’t know if is this was because the GN’s political leaders didn’t understand the depth of the recession or if it was because they knew the economy would bounce back anyway.

But in retrospect, he said it was likely a good approach.

“Tamapta looks like a fairly prudent move from the government’s standpoint, because it addresses all those things that the economy can’t take care of. At the end of the day, when you look at it, the economy has taken care of itself. It’s growing,” Clinton told reporters.

Another big problem that prevents unemployed Nunavummiut from benefitting in new mining wealth is geography.

Nunavut residents who live a long way from mines will have a lot of trouble finding jobs on these new projects — because of their lack of mobility and because most regional Inuit benefit deals are aimed only at people in the immediate region.

“When organizations such as ours, the KIA [Kitikmeot Inuit Association], when they sign the IIBA, it stipulates in there that a certain amount of Inuit, or beneficiaries must be hired from these communities, the ones that are close to the mine,” Bob Aknavigak, the KIA official who serves as chair of the NEF, told reporters.

Clinton told reporters that, because of this, Nunavut may wish to study the issue of labour mobility.

“You do have large segments of the population who are unemployed or employable but living in communities that are untouched by economic development and have no way of accessing those opportunities,” Clinton said.

Other highlights of the economic outlook include:

• a prediction that Nunavut’s economy will grow five per cent a year over the next five years;

• a finding that the school drop-out rate in the Kivalliq has increased, despite the prospect of better jobs and an improved graduation rates for the territory as a whole;

• the divide between rich and poor will become one of Nunavut’s biggest problems;

• money available to the GN to build public infrastructure will drop 50 per cent this year;

• unless more people become financially independent, Nunavut’s housing shortage will be perpetual, and the constant building of new social housing units could one day place an unacceptable financial burden on the territorial government;

• growth in personal income is stagnating in relation to the cost of living;

• because of the lack of up-to-date information, it’s impossible to evaluate the true economic value of subsistence harvesting.