“If people were sober, we wouldn’t be getting that call” 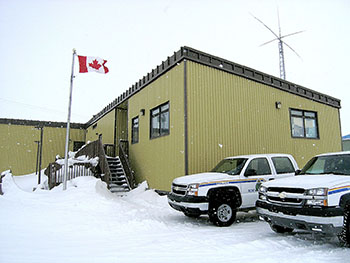 Alcohol fuels most of the calls that the seven-member RCMP detachment in Cambridge Bay deals with. (PHOTO BY JANE GEORGE)

Alcohol-related offences continue to drive up the number of crimes in Cambridge Bay, say police.

“It’s all about booze,” said RCMP Sgt. Charlie Gauthier, when asked about the rising levels of crime in the community.

Nine in 10 calls to the RCMP remain directly connected to the over-consumption of alcohol, he said.

Cambridge Bay currently has no restrictions in place on the amount of alcohol which can be ordered in. So, a steady stream of alcohol flows into the community from Yellowknife, ordered by residents who drink it themselves or sell it for profit.

According to Gauthier’s recent report to the Cambridge Bay hamlet council, February saw 16 assaults, 42 cases of mischief, and 10 breaches of Nunavut’s liquor act, mainly due to public intoxication.

Mischief charges usually result when house parties break up in the early hours of the morning, and guests either don’t want to go home or cause property damage.

Then, the RCMP gets a call.

“If people were sober, we wouldn’t be getting that call,” Gauthier said.

The number of charges for public intoxication include only those which police are specifically called in to deal with, he said.

In total, police received 89 calls in February where alcohol was somehow involved.

Gauthier attributes the dip in January to the combined impact of the two-week Christmas ban on alcohol and additional recreational activities in the community.

February’s increase could be due to an influx of people from other communities into Cambridge Bay for a major hockey tournament, but “sometimes you can’t pin it down,” Gauthier said.

“But these statistics don’t tell what the community is like. We rarely have to use force…it’s all about booze,” he repeated.

And not included in these statistics is the recent death of an intoxicated man who apparently froze to death on a porch.

To date this year, 145 individuals have been also been incarcerated in the RCMP’s five cells — sometimes as many of 18 at a time.

Many have been brought in due to a breach of conditions on previous offenses, which prohibit any alcohol consumption.

Drugs, including marijuana and magic mushrooms, are also present in Cambridge Bay, and February also saw three arrests for possession of drugs.

But nabbing drug-dealers and bootleggers continues to be hard because people make complaints, but don’t want to sign any formal statements, Gauthier said.

Gauthier hopes that a planned review to the Nunavut Liquor Act may lead to changes, which will help improve conditions in Cambridge Bay.

Meanwhile, Cambridge Bay is trying to bolster support for another liquor plebiscite in 2011, which would see the creation of an alcohol education committee and possible restrictions set on alcohol orders to the community.