In Kuujjuaq, Saganash woos Nunavik for the NDP 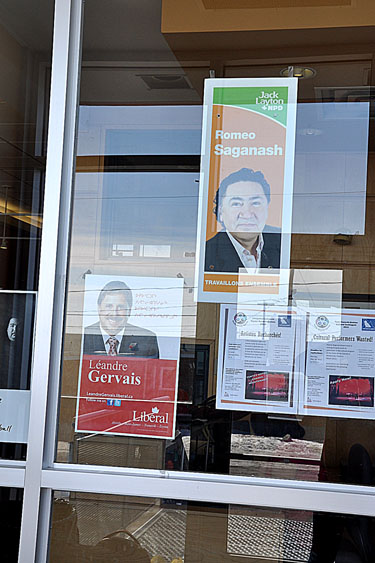 There isn’t much sign of a federal election in Nunavik, although two of the riding’s candidates included stops in Kuujjuaq during their campaigns and left these signs. (PHOTO BY SARAH ROGERS)

KUUJJUAQ – A float plane landed on Lake Waswanipi in northern Quebec’s Cree territory in 1962, the day Romeo Saganash was born.

It was a sign of bigger things to come. His mother, who bore 13 other children, named her son after the plane’s pilot.

That’s the personal tidbit the Cree leader and NDP candidate in Abitibi-James Bay-Nunavik-Eeyou opens with at a recent visit to a Kuujjuaq office.

Saganash tries to be personable, despite his shy, soft-spoken demeanour, when he courted potential voters in his 24-hour trip to Nunavik.

He’s one of only two candidates who have actually made the trek to Nunavik: Liberal candidate Léandre Gervais visited Kuujjuaq April 20. Green Party candidate Johnny Kasudluak is based in Inukjuak.

“The challenges this riding will face are significant,” Saganash tells staff at the Kativik Municipal Housing Bureau, rhyming off issues like resource development, aboriginal rights and climate change.

He believes he can help, by “closing the gap” between the regional and federal governments.

“It’s important, because relationships are the basis of everything else,” he said.

Saganash is riding a wave of orange support in Quebec that could give the province the highest number of New Democratic MPs in history.

The only poll in the riding, conducted April 20, placed him eight percentage points behind his Bloc competitor.

But the NDP’s support has continued to swell in Quebec. An Ipsos-Reid poll this past week positioned the NDP at 42 per cent support in Quebec, 16 points ahead of the Bloc.

“It takes me an hour to do my groceries,” he jokes, referring to his new-found popularity in Val d’Or, the riding’s main town and Saganash’s campaign base. “We feel it on the ground at work. People are very enthusiastic.”

He says that, strangely, fruits are cheaper in Kuujjuaq than they are in many Cree communities.

Saganash understands issues like expensive groceries and overcrowded housing — because he grew up with them.

He said the number of housing units needed in Eeyou (Cree territory) to meet current demands is 1,600 – 600 more than what Nunavik is asking for.

Tackling the housing crunch is abig priority on the NDP’s agenda, if the party is elected, and Saganash even offers the guarantee that “if Jack [Layton] doesn’t do it, I’m resigning.”

They are strong words from a strong candidate, who says he runs 45 minutes every day.

“It’s a lot of work, a lot of travel,” Saganash said. “But I’m in good shape. I could do five more weeks of this, no problem.”

In a party that isn’t accustomed to faring well in Quebec during federal elections, Saganash has emerged as a star, although he isn’t comfortable admitting as much.

The NDP, who don’t have the same organization in Quebec that the Liberals and Conservatives can muster, will fly in volunteers to Val d’Or in the campaign’s final days.

If Saganash’s stardom can launch him into the House of Commons, he says he’ll deliver his first speech in Cree.

“I know who I am, I know where I come from and that has to be my first gesture,” he said.

But Saganash hails from a region where only 25 per cent of voters cast ballots in the 2008 federal election; in Nunavik, the turnout wasn’t much higher at 40 per cent.

He wants to win May 2, but he needs a strong voter turnout. He also knows that the election falls during a popular fishing and hunting season in Nunavik and occurs during Goose Break in Cree territory.

There’s a quiet consensus in the room, as people move their heads in agreement.