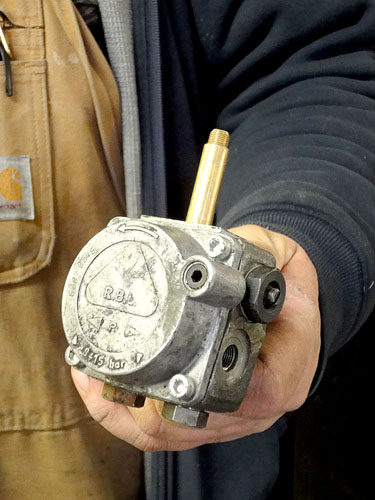 Nunavut’s petroleum products division doesn’t know yet why so many fuel pumps have broken down in the Kitikmeot region. (FILE PHOTO)

Nunavut’s petroleum products division still doesn’t know why up to 200 furnace fuel pumps in Cambridge Bay and other Kitikmeot communities have gummed up and stopped working since last December.

Todd McKay, the PPD’s manager of fuel operations, said in a July 29 interview that exhaustive tests on the fuel and the lubricity additive put into this fuel, which was delivered in 2009, did not turn up anything wrong.

“We have yet to stick our thumb on something, and say it’s the fault of the additive, or it’s the fault of the fuel, or is it the fault of water in a particular tank. We’re still digging to determine [that], and, in the same breath, trying to enable ourselves to see that this resupply goes appropriately and we don’t put good fuel on top of bad fuel and create another year of the same problem,” McKay said.

PPD is still trying to pinpoint the cause of the problem with the fuel pumps — but it’s a challenge that McKay likened to “chasing a ghost.”

McKay said compensation for the fuel pumps that broke down is not “out of the question”— although he said he can’t decide this.

But until there’s some cause determined for the break-downs, it’s premature to even talk about compensation, he said.

To date, there’s “nothing questionable about the fuel” and no clear reason why the fuel pumps stopped working. All there is a complaint, McKay said.

Over the past eight months, Cambridge Bay’s Enokhok Development Corp. says it has been forced to replace more than 20 fuel pumps at its various properties around town, sometimes three times at the same address, because they’ve gummed up and broken down.

Martin Moffitt, northern operations manager for Enokhok, which owns and manages property in Cambridge Bay, Kugluktuk and Gjoa Haven, maintains the total amount of damages incurred by Enokhok and other parties due to replacing the fuel pumps stands at more than $100,000.

But McKay said Moffitt is the only person who has contacted his office with complaints about fuel pump problems.

“I don’t know if it’s the magnitude it’s been made out to be,” “McKay said. “It is a problem. But how big of a problem?”

PPD wants to learn from this and why “someone is having a problem with fuel pumps in Cambridge Bay,” he said.

One solution being looked at is a method of removing the lubricity additive — needed for engines — when fuel is loaded on to oil trucks.

“We know there is additive present in the fuel pumps (of course, it’s in the fuel),” McKay said in a July 30 email.

“But we have not been able to determine if that’s the reason for the gumming… either way we want to know if it is even possible to do this and if filters exist… it’s just another thing we are looking at to ensure the customer does not encounter problems.”

As for the additive for lubricity in fuel delivered to Cambridge Bay in 2009 — which has been fingered as a possible cause of the fuel pump break-downs— it was added at the refinery before transport north, not in Tuktoyaktuk as Moffit has claimed, McKay said, and met standards along the way and afterwards.