“On climate change we need more than words” 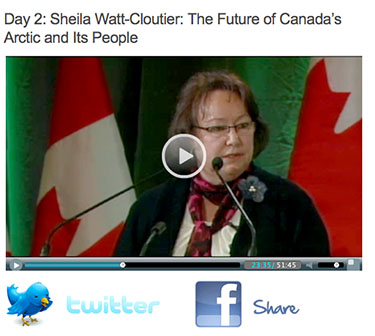 Environmental activist Sheila Watt-Cloutier said in a speech this past weekend that recent Liberal and Tory governments have each failed to either make or keep commitments to effectively combat climate change.

“While our current government has formally walked away from our international obligations, previously the Liberal government said much, but acted little,” she said.

Watt-Cloutier, a former head of the Inuit Circumpolar Council and a recent Nobel Peace Prize nominee, made the remarks in a webcast speech before the Canada 150 thinker’s conference held in Montreal by the Liberal Party of Canada to find new policy ideas.

Saying that Inuit “have already been the recipients of the most dramatic impacts of climate change,” Watt-Cloutier urged Liberals to take the issue more seriously.

“No matter which party is in power, on climate change we need more than words,” Watt-Cloutier said.

At the same time, she also praised recent Liberal governments for their openness to the idea of working closely with national and international Inuit and aboriginal organizations.

And she said that the current Tory government, despite the presence of Nunavut MP Leona Aglukkaq in the cabinet, does not offer the same level of access to Inuit leaders.

“I definitely recommend that a future Liberal government re-commit to engage and draw upon the insight and wisdom of northern people as one means regaining international leadership,” she said.

To that end, Watt-Cloutier cited former Liberal environment ministers David Anderson and Stephane Dion, as well as ex-foreign minister Lloyd Axworthy, who she praised for his work in establishing the eight-nation Arctic Council.

She said that in the 1990s, this co-operation with Inuit and other aboriginal organizations was a major factor in the successful completion of the Stockholm Convention of 2001, which imposed a global ban on persistent organic pollutants like DDT and PCB.

“The commitment was commendable… We worked so closely together in terms of trying to get this issue dealth with,” Watt-Cloutier said.

However, she said the federal government must continue to include aboriginal people in the formation of foreign policy

“The role of aboriginal people in Canada’s foreign policy does not end in Stockholm,” she said.

Watt-Cloutier also said Inuit are not “powerless victims” and that over the past 50 years, Inuit have “weathered the storm of modernization remarkably well” and will continue to adapt to change.

“People think we are not adaptable. Nothing could be further from the truth. This is part of who we are, to be able to adapt,” she said.