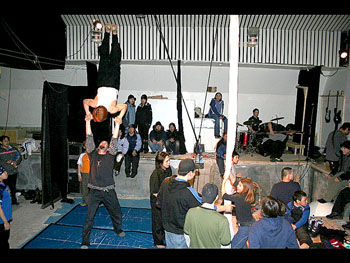 Like many of the other nine swimming pools in Nunavut, Igloolik’s 29-year old pool is no longer functional, used only by for practice by Artcirq’s circus arts performers. (PHOTO HARVEST FROM WWW.ARTCIRQ.ORG)

Many Nunavut communities are clamoring for swimming pools and ice-making equipment due to the combination of warmer temperatures and increasing demands for recreational activities, say two studies tabled in the Nunavut legislative assembly during its last sitting.

But these pools and ice plants come at a steep price, the two studies found.

Pool costs range from $4.7 million for a modest, all-season pool to $21.2 million for a much larger complex — and that’s not counting annual operations costs.

Ice-making plants come in a bit cheaper, but still roll in at about $1.2 million each.

But all these pools are aging and show signs of deterioration because of poor design and construction, says a review by the technical services division of Nunavut’s Community and Government Services department, tabled March 10 in the legislature.

The pools, most of with were designed for seasonal use only, suffer from poor insulation, high humidity and makeshift repairs.

As a result, the pools leak and suffer from mould, leading to costly repairs and raising the possibility health hazards such as air contamination, the review says.

For example, the pool in Igloolik , built 29 years old ago for $4 million, can’t be used anymore. The circus group Artcirq now uses the drained pool as a practice area.

The Government of Nunavut review looked at various cost and design options for pools, recommending a four-lane steel pool in a separate building for a cost of $4.7 million and a $21.2 million price tag for a recreational facility with a five-lane, junior Olympic-sized pool, leisure pool and spa.

The prices were based using Iqaluit construction costs, so it would be even more expensive to build similar pools in smaller communities.

And these estimates doesn’t include the annual costs of operating pools, which can run as high as $1.2 million, as well as the cost of beefed up security.

Almost all Nunavut communities have experienced “significant vandalism” to infrastructure, notes the review — and vandalism could prove catastrophic to costly pool facilities.

“The potential effects of vandalism… could result in severe installation failure and injury to people in addition to the facility itself,” it says.

But building cheaper outdoor facilities aren’t worth the trouble in Nunavut, the review concludes, because they can only be used for short periods during the summer.

The main problem with moving ahead with stand-alone, all-year pools is not the willingness but “the method and the source of funding,” says the review, which suggests the “ideal solution” is to strike a public-private partnership for a larger facility, like the one Iqaluit wants.

This would see a company build the facility and then lease it back to the city, a private pool operator, or a new agency within the GN.

The GN should challenge the veto power of ratepayers who rejected a $12-million borrowing proposal for a recreational complex in 2006, the review recommends.

“This power of veto should be revisited and challenged by the Government of Nunavut, since many ratepayers are not property owners,” it says.

Making better ice and prolonging the hockey season looks a lot simpler and less expensive than building pools, a study by Accutech Engineering of Winnipeg shows.

For this study, consultants looked at the feasibility of arena ice plants in Arviat and Coral Harbour, where the hamlets face troubles installing and maintaining good quality ice and avoiding frost condensation.

This frost, which falls down from the ceiling to the ice, is “unacceptable from both a public safety and operational point of view,” the study says.

Arviat’s arena maintains good ice from December and to mid-March.

Coral Harbour skaters can take to the ice from November to March, but, as spring comes, they have to watch their heads, due to problems with falling ice.

The same problems of operational costs, training and retention of staff, maintenance of operating equipment, and vandalism affect arenas in Nunavut.