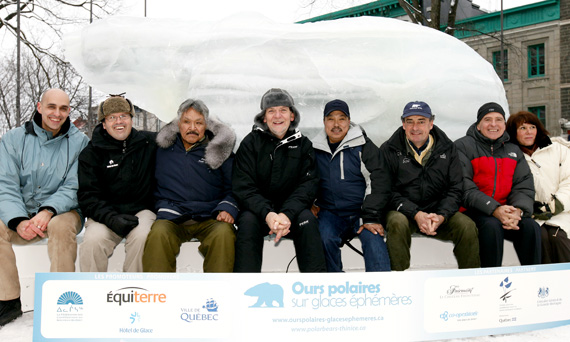 This ice bear, seen here in Quebec City last month, has been moved to Place Ville Marie Belvedere in Montreal, where it will melt down to its bronze skeleton. (PHOTO BY X. DACHEZ)

This ice carving of a polar bear, which has been displayed already in Quebec City and Ottawa, is now at Montreal’s Place Ville Marie Belvedere, where it will stay until it has melted away.

The ice bear display is part of climate change campaign organized by the Quebec environmental group Equiterre and the Fédération des coopératives du Nouveau-Québec, in cooperation with WWF-Canada, Quebec’s ice hotel, the Hotel de Glace, and the city of Quebec.

“The melting of this eco-sculpture, which will expose a bronze skeleton, symbolizes the unfortunate impact of climate change on northern communities,” said Rita Novalinga, the FCNQ’s general manager.

A similar carving of a bear quickly melted down to its bronze bones front of the WWF’s Arctic tent in downtown Copenhagen before the start of the United Nations climate change conference last December.

“By letting it melt in the heart of downtown Montreal, we hope to impress on Montrealers the impact of climate change,” said Steven Guilbeault, Equiterre’s deputy director.

The ice bear’s bronze frame was sculpted by Mark Coreth. Puvirnituq carvers Peter Boy Ittukallak and Juanasi Jack Ittukallak sculpted the block of ice frozen around the frame into a polar bear figure.

As part of a project called “polar bears on thin ice,” the FCNQ is partnering with the Quebec environmental group, Equiterre, and Quebec City’s ice hotel, to bring the ice bear to southern Quebec.

They’re also asking nine to 12 year-olds to write “Letters to the Polar Bear” about climate change and what measures they are willing to take to reduce their own energy consumption.

The top “most committed” letter writers will win a three-day trip to Nunavik.

Organizers of the ice bear display also want to take the bear— with a new ice body— to Toronto for this summer’s G8-G20 summit of world leaders.

For more information on the ice bear go to www.ourspolaires-glacesephemeres.ca.