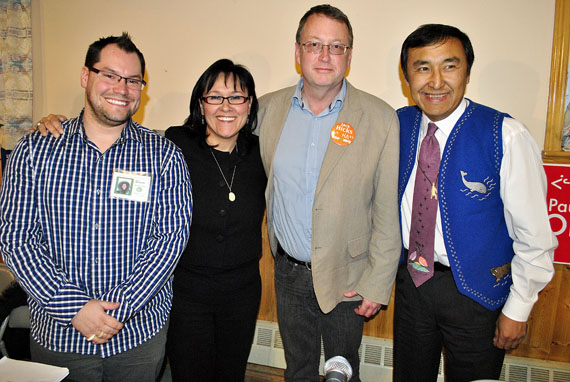 Nunavut’s federal election campaign headed for the finish line this week with Conservative incumbent Leona Aglukkaq attacking her challengers and the Liberals and NDP returning the favour.

Aglukkaq said Liberal Paul Okalik and New Democrat Jack Hicks are resorting to “desperate attacks” in the final days of the campaign.

“The Liberals and NDP can try to paper over their lack of commitment to and plan for the North, but voters know that the Conservative Party has walked the talk for Nunavut, that we have the best plan for the future, and that I will continue to stand up for Nunavut,” Aglukkaq said in a statement.

Okalik accused Aglukkaq of making up her own Nunavut policy on the fly by promising a hydroelectric dam for Iqaluit and a highway and power line connection between Rankin Inlet and Manitoba. Okalik said he supported such projects but that the Tories haven’t budgeted any money for them.

“What is clear is the Harper Conservatives are more focused on fighter jets, corporate tax cuts and cutting social programs rather than addressing Nunavut’s most pressing needs,” Okalik said in a release.

“I believe the federal government has a moral and legal obligation to consult with Inuit before unilaterally imposing bans that affect traditional rights,” Okalik said.

Hicks took aim at Aglukkaq’s claim that she had anything to do with the record-high $1.2 billion in transfer payments Ottawa is sending to the territorial government in Iqaluit this year.

The federal government should pursue policies that focus on “the well-being of children.”

“Many good things flow when you do that, they follow later in life,” he said.

“I fully support the hunt and look forward to the celebrations after the whale has been caught this season,” MacCallum wrote in an email to Mayor Madeleine Redfern.

All candidates are expected to be back in Iqaluit for election night. While Aglukkaq is still seen as the front runner, at least one seat projection has the NDP creeping up on the Tories in Nunavut.

The blog threehundredeight.com, which compiles seat projections based on a constant stream of national polling data, puts the New Democrats within striking distance in Nunavut.

But the projections are based on local extrapolations from national polling data and may be less accurate than traditional polls.