“It’s going to be crowded in the Arctic” 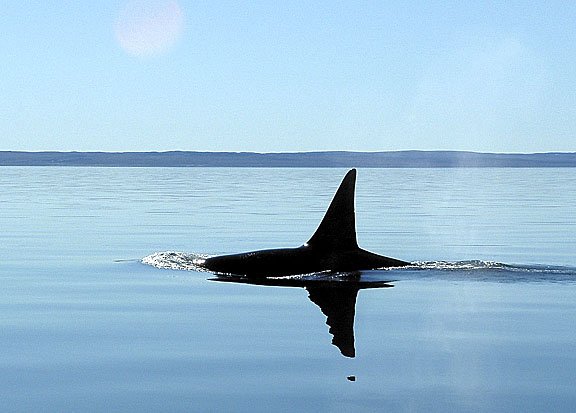 More killer whales, like this one photographed near Repulse Bay, are turning up in Nunavut waters, where they hunt other marine mammals. (PHOTO COURTESY OF DFO)

OTTAWA — Soon polar bears may not be the top predator in Arctic waters.

That job may fall to stocky, black and white killer whales.

Killer whales are being sighted in increasing numbers all over the Arctic, and have a huge appetite for seals, narwhal, bowhead whales and belugas, Steve Ferguson, a research scientist with the federal Department of Fisheries and Oceans in Winnipeg, said Dec. 15 at the ArcticNet conference in Ottawa.

If they start arriving in greater numbers for longer periods of time, wildlife management officials may have to consider ways to limit the killer whales population by hunting or some other method before they wipe out other species, he said.

“We might want to think about that in the future,” he told an ArcticNet session on marine mammals.

After listening to Ferguson’s presentation, Joey Agnatok of Nain, who fishes off Labrador, said he couldn’t agree more.

Agnatok saw a group of 100 killers whale near Makkovik earlier this year— and once, while sailing in the Torngats, he and others on board were surprised to see seals suddenly hopping on to nearby ice floes.

Then, three killer whales were spotted circling for prey.

Sixty years ago there were no reports of killer whales in the Eastern Arctic — but now they’re relatively common sights during the summer months.

Known for their cunning hunting practices and hearty appetites, killer whales appear to have expanded their range to the north and west of Baffin Island.

No one is certain how many killer whales there are, “more than 50,” Ferguson said, but the numbers of killer whales summering in the Eastern Arctic region could go as high as 2,000.

“And it’s going to be crowded in the Arctic [waters],” Ferguson said.

That’s because due to global warming the cooler Arctic waters are also becoming more hospitable to other whale species.

But these whales could become lunch for fierce killer whales, which can reach six to eight metres in length (19 to 26 feet) and weigh more than six tonnes: a dozen seal tags have been found in the stomach of one killer whale and a caribou in another.

Scientists also suspect rising temperatures have paved the way for killer whales to expand their range as decreasing sea ice allows the killer whales to more easily follow, find and kill their prey.

And killer whales avoid sea ice because of their large, vulnerable fins.

Killer whales were found in the past around Baffin Bay, but not in western Hudson Bay or in the High Arctic islands, although a traditional knowledge study on killer whales says an Igloolik elder predicted a new marine mammal would some day appear in the region.

Now, hungry for the same marine mammals that Inuit hunt, the killers whales have arrived.

Three to five killer whales have been spotted killing a bowhead, while larger groups usually go after belugas.

According to figures from Ferguson, killer whales may be responsible for reducing numbers of narwhals, belugas and bowheads by a third.

A killer whale attack on narwhals at Kakiak Point in Admiralty Inlet in 2005 saw a dozen killer whales kill several narwhals over a six-hour period.

This reflects the concerns of many Inuit hunters who say that that killer whales are likely to frighten off the marine mammals they don’t manage to kill.

For now, killer whales are summertime visitors to the Arctic, leaving with the sea ice in the autumn.

As for the winter, one satellite-tagged killer whale was followed to the middle of the North Atlantic.

But if the Arctic experience more ice-free days, the killer whales may decide to stay longer in the north.