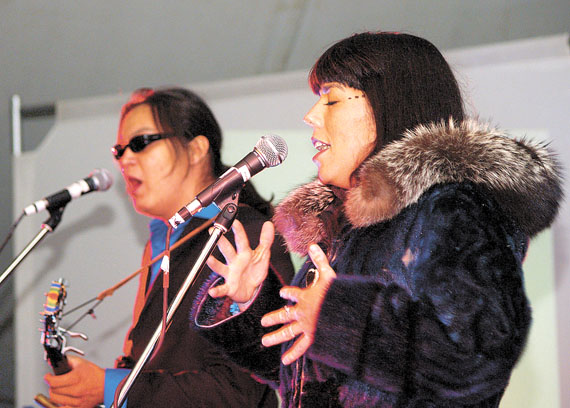 ShoShona Kish, left, and Raven Kanatakta of the band Digging Roots kick off the opening concert of the Alianait arts festival in Iqaluit this past June 22. This year, the festival will run only four days, from June 30 to July 3, a decision based on a community survey. (FILE PHOTO)

Iqaluit’s summer arts festival might be taking a cut in length, but organizers promise a stronger, fuller festival in 2011.

The 2011 Alianait Arts Festival will run from June 30 to July 3, bringing four days of activities instead of the 11-day festival held in previous years.

The festival’s shorter format is in response to a community survey circulated in December, in which 55 per cent of respondents said they thought the festival should be five days or less.

In past years, the festival has run from July 21 to July 1, to take advantage of the many holidays that fall into that period, including Aboriginal Day, the summer solstice and Canada Day.

But Daley said organizers found it difficult to fill the festival’s outdoor venue – the Big Top tent in front of Nakasuk school – with 11 days worth of entertainment.

To add to its difficulties, Alianait’s tent was almost swept away in 2010 by 90 km/h winds.

The 2011 festival line-up won’t be announced until next month while organizers finalize schedules.

The focus in 2011 will be to promote Nunavut acts and Inuit performers from across the Arctic, Daley said, adding that local talent is the festival’s strength.

In 2010, 64 per cent of the festival’s performers hailed from the territory, making Alianait one of the top festivals in Canada for featuring regional performers.

Organizers have also decided to make entry to roughly half of 2011’s events free of charge for Iqalummiut – mainly day-time, family-oriented events held under the Big Top.

“It’ll give people more opportunity to come down and see what’s happening,” said Janet Brewster, chair of the festival’s board of directors.

Ticketed evening events will still be held at the Nakasuk school gym, she said.

And Alianait will continue the tradition of inviting performers to give workshops during the day, from drum-making, to visual arts and ethnic dance lessons.

“Over the years, I think Alianait has really exposed people to the arts,” Brewster said. “It’s given people the opportunity to do more than just listen to music, but to take part.”

Alianait launched in 2005 as a grassroots festival put together by leaders in Iqaluit’s artistic community.

The festival has grown considerably since, now receiving regular funding through Heritage Canada, the GN and sponsorships from private companies.

Alianait is hosting a benefit concert at Inuksuk high school Jan. 22 at 7:30 pm.

Advance tickets are on sale for $10 at Arctic Ventures, or for $15 at the door. Elders and children under 12 accompanied by an adult are admitted free.