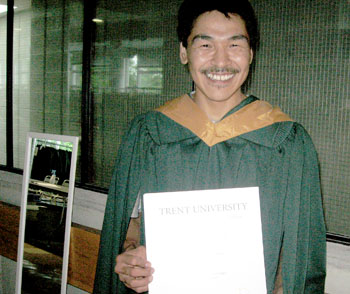 Robby Qammaniq of Arctic Bay said he was “shocked” when he discovered the amount of work, especially reading, that university requires. (PHOTO COURTESY OF ROBBY QAMMANIQ)

Sometimes getting an education teaches you more than you expected.

Robby Qammaniq graduated with a bachelor’s degree in biology in September 2009, a three-year degree that took him eight to complete.

Qammaniq once thought of studying biology as a way into medicine, but university was so difficult that he found a new reason to continue: to help other Inuit who want a university education.

Now 30, he’s only one summer away now from earning a diploma in adult education.

“Inuit are starting to get used to the education system and it’s still very difficult for young people,” he said. “I had a really hard time in university and I want to make it easier for them.”

Qammaniq graduated from Inujuaq School in Arctic Bay in 2001 and immediately started biology studies at Trent, finally graduating in September 2009.

“I was kind of shocked by the amount of work I had to do in university, so I failed,” he said.

Qammaniq bounced between full-time and part-time studies from one year to the next, including going back to high school to improve his basic science courses.

He quit university and resumed studies every year from 2005 to 2008.

“I gave up a couple times,” he admitted. “But I wanted to finish it.”

But in 2008, Qammaniq decided he’d had enough of failure. He never dropped out again.

Studying biology, Qammaniq had a surprising advantage over many of his urban-bred classmates in certain situations.

“I had to dissect a rat,” he said. “I used the technique like how they skinned caribou or seal,” he said. “I would start from the guts and just cut it open. It was really exciting.”

But the specialized language of university-level science was challenging for him.

“The words are very technical and they are so wordy,” he said. “I had to learn it from the books and it took me a while. I’m still struggling with writing lab reports.”

Qammaniq said that he quickly realized the English vocabulary used by many students from the south was much wider than his and he realized one of the main reasons for it.

“The Inuit are not prepared for university because they don’t read a lot,” he said. “Because in the south the students start reading at a very young age and they can read and read and sit still for a long time rather than doing something else.”

“To understand those contexts, you have to bring out some props and media instead of reading, reading all the time,” he said.

When Qammaniq started the academic stream of high school, he was intent on becoming a physician, but his grades weren’t good enough.

Once he wraps up his teaching diploma this summer, Qammaniq has a one-year contact with Nunavut Sivuniksavut as an instructor trainee.

“I really want to go back up north,” Qammaniq said. “I want to be among Inuit and I want to teach them because there’s so many people who have dropped out of high school and aren’t doing anything.”

Even if post-secondary education isn’t your goal, Qammaniq said finishing high school is something more Inuit should do.

“When we start in kindergarten and we drop out in Grade 10 and we spend all that time and for what? Everyone should try to finish.”