“We are extremely pleased,” president of Advanced Exploration says 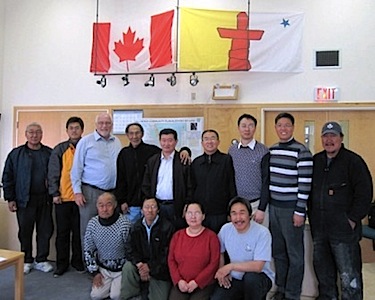 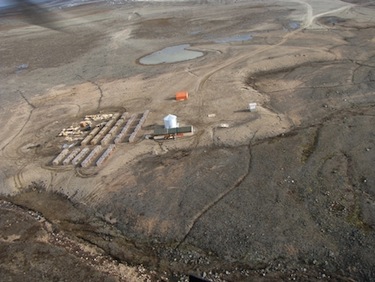 An aerial view of the Roche Bay property shows the iron exploration project still has a long way to go before it will become a working mine. (PHOTO/ADVANCED EXPLORATIONS)

A Chinese pipe-making company announced Sept. 27 that it’s ready to spend as much as $1 billion to fast-track the proposed Roche Bay iron mine on Melville Peninsula into production.

The property, located south of Hall Beach and only 10 kilometres from the coast, has the potential to produce one million tonnes of iron nuggets, which are used in steel production and worth at least a $140 million a year.

The iron nuggets would be “the highest value product to be shipped from a Canadian mine,” brags the website of Advanced Explorations, owner of the Roche Bay project.

According to the terms of the deal, XinXing Ductile Iron Pipes, one of the world’s largest producers of cast iron pipe, and China Huaxin International, will pay $5.3 million for about 19 per cent of Advanced Explorations’ shares.

With this, the two Chinese companies also become partners in a new joint venture company with Advanced Explorations to be called Roche Bay JV.

In exchange, XinXing also agrees to give $20 million to Roche Bay JV to complete its feasibility study on the Roche Bay project and to provide an additional $30 million of working capital when this study is finished.

XinXing will also cover all the necessary financing and development capital for the Roche Bay project up to a maximum of $1 billion.

In return, Advanced Explorations has guaranteed to sell 50 per cent of its iron output to XinXing once the Roche Bay project begins production.

“We are extremely pleased with our partnership with XinXing Pipes Group,” said John Gingerich, president and chief executive officer of Advanced Explorations, “The global demand for iron ore has brought international focus to the world’s emerging opportunities. ”

The deal comes as iron-hungry China recently ordered about 48 steel mills to shut down operations for up to one month to slash output by up to 70 per cent to meet a five-year energy efficiency target for the end of 2010.

As for the economic impact on Hall Beach and Igloolik, if the mine becomes reality, it will provide hundreds of jobs.

Most of the Advanced Explorations staff for the exploration camp is hired locally and trained for a variety of duties, says the company’s website.

In 2008, the company sponsored the local hunters and trappers association’s bowhead whale hunt, “with our cook participating in the following ceremonial fast. ”

This past week also saw the potential for change at Baffinland Iron Mines Corp, when an investment group called Nunavut Iron Ore made a hostile takeover bid Sept. 22 for the company.

Baffinland has set up a committee to analyze an unsolicited $274-million takeover for its $4-billion Mary River iron ore project on Baffin Island.

The Mary River site contains up to 500 million tonnes of high-grade reserves of iron ore which would keep an open-pit mining operation busy for 20 years. 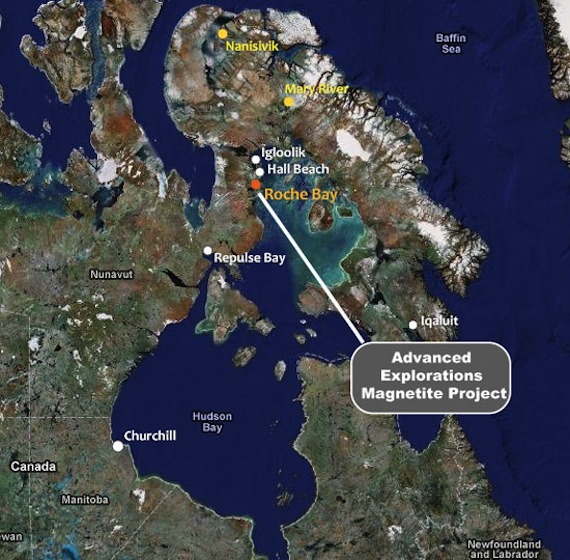 This map shows the location of the Roche Bay project on Nunavut’s Melville Peninsula. (PHOTO/ADVANCED EXPLORATIONS)