The James Bay Cree of Quebec gained ownership over most of the land covered by the Nunavut territory’s most southerly chain of islands, through an offshore claim agreement signed July 7 in Chisasibi, Quebec.

“This is an agreement in every sense of the word — no court orders, no arbitration, just plain, old-fashioned good-faith negotiation,” Chuck Strahl, the northern affairs minister, said at the signing ceremony.

Nunavut Premier Eva Aariak and Matthew Coon Come, Grand Chief of the Grand Council of the Crees, also signed the agreement, which covers islands and waters in James Bay and Hudson Bay lying off the coast of Eeyou Istchee, the Cree region of northern Quebec.

The Cree now own 80 per cent of the land mass of those islands, about 1,050 square kilometres, under a form of title that includes subsurface rights.

This collection of small islands within Nunavut all lie south of Long Island just below the top of James Bay, and stretches almost to the southern end of the bay.

Because these islands are not part of the Nunavut land claims settlement area, no overlap agreement with the Inuit of Nunavut was required.

But because they do lie within the Nunavut territory, they’re subject to territorial legislation.

The Cree Regional Authority will manage the Cree-owned islands, while Canada will retain rights to seabed, tidelands and waters.

To the north of Long Island, in area that stretches along the eastern coast of Hudson Bay to a point just north of Umiujaq, the Cree and the Inuit of Nunavik already exercise joint ownership of offshore islands, under an overlap agreement reached in 2003.

Under the deal, Ottawa will pay the Cree $50 million over nine years, as well as $5 million to implement the deal after it’s ratified.

As well as gaining surface and subsurface rights to the lands they own, the Cree are also entitled to resource royalty payments from any resource extraction developments that might occur in their offshore area, known as the Eeyou Marine Region.

The agreement also creates an impact review board, a planning commission and a wildlife board.

Nunavut will get one seat on each of those boards.

At the same time, Cree may harvest wildlife in the area without a permit, subject to conservation measures, and Cree will have the exclusive right to harvest wildlife for commercial purposes.

The Eeyou Marine Region Land Claims agreement must now be ratified by legislation that will be brought soon before the House of Commons.

The James Bay islands covered by the agreement have been used primarily by Cree hunters, although Inuit whose descendants still live in Chisasibi have also hunted there, especially on Charlton Island, which is now uninhabited.

Charlton Island is the most southerly point of land within the legal boundaries of Nunavut. 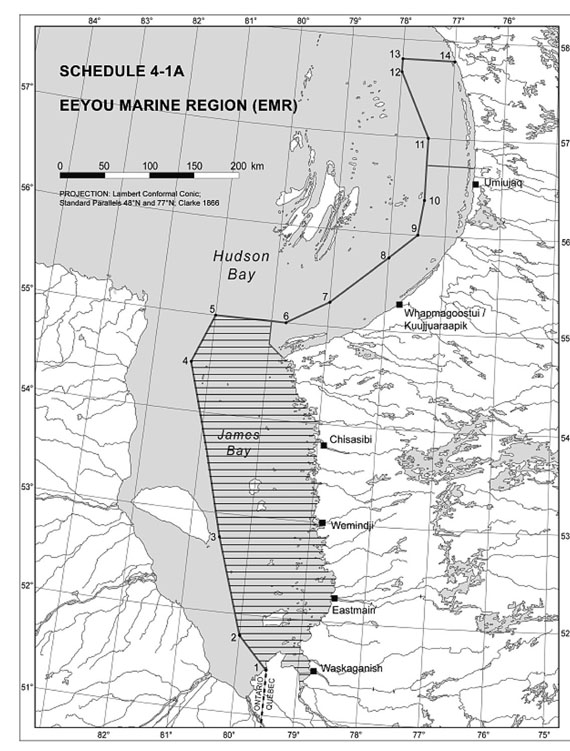