Airline creates one long route from YK through to Montreal 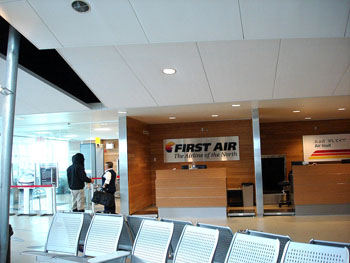 Heading to Montreal from Iqaluit or Kuujjuaq? As of May 31, First Air flights arrive later at Trudeau airport on Monday, Wednesday and Friday. (FILE PHOTO)

KUUJJUAQ — A First Air schedule change, in effect May 31, means big changes for people travelling from Yellowknife through Iqaluit to Montreal.

The change means that two 737s will make long loops between Montreal and Yellowknife every Monday, Wednesday and Friday, with stops in Rankin Inlet, Iqaluit and Kuujjuaq.

Before the schedule change, one jet did the round-trip from Yellowknife to Iqaluit while another flew between Montreal and Iqaluit.

The schedule change has led to staff lay-offs, because fewer crew will be required now, said a First Air employee who did not want to be named in this story.

The change also affects some crew members who regularly worked on the Montreal to Iqaluit route because they’ll now be based out of Yellowknife instead of Montreal.

The schedule change is a cost-saving measure due to First Air’s “getting smashed by West Jet” on its Yellowknife route, the employee said.

The change affects departure and arrival times along the entire route between Montreal, Kuujjuaq, Iqaluit, Rankin Inlet and Yellowknife.

And this has some Kuujjuaq passengers grumbling already.

Those leaving north from Montreal now have to get up earlier in the morning. They must check in at Trudeau airport an hour and a half earlier, because the flight the flight north to Kuujjuaq and Iqaluit leaves at 8:30 a.m. instead of 10 a.m.

The schedule change also affects passengers out of Iqaluit, because the same flight now leaves Iqaluit for Rankin Inlet and Yellowknife about three hours earlier than before — at 1:30 pm.

The flight from Iqaluit to Montreal also departs later than before, at 4:40 pm. It then stops in Kuujjuaq to pick up passengers for a 6:30 p.m. departure, and arrives in Montreal at 8:45 pm.

Some frequent travellers between Kuujjuaq and Montreal say the new arrival time in Montreal — 8:45 p.m. — is inconvenient for making connections with other flights.

They also worry about the impact of bad weather along the new, longer route, due to bad weather in Rankin Inlet or Iqaluit.

“Given delays, the planes are likely to arrive after 9:00 p.m. or 10:oo pm,” said a Kuujjuaq resident who often travels between Kuujjuaq and Montreal.

On Tuesdays, Thursdays, Saturdays and Sundays, passengers heading to and from Kuujjuaq to Montreal will continue see the schedule stay the same. On these days, flights leave Montreal at 10 am and arrive back from Kuujjuaq at 4:55 pm.

Other changes are expected to impact the Montreal to Kuujjuaq route during the summer season when cruise ship passengers and caribou hunters add additional traffic.