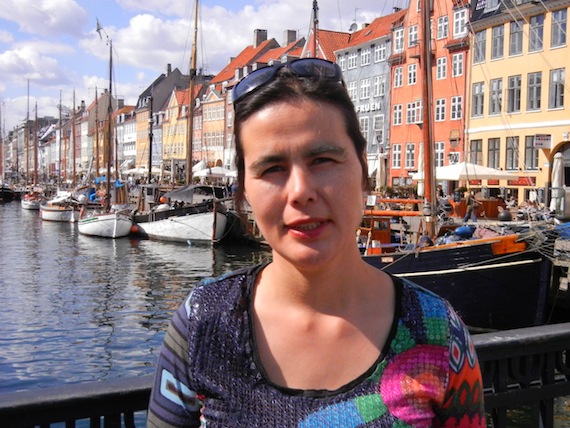 It easier to talk about climate change in Copenhagen than in Greenland, says Greenlandic climate activist, writer and author Lana Hansen. (PHOTO BY JANE GEORGE) 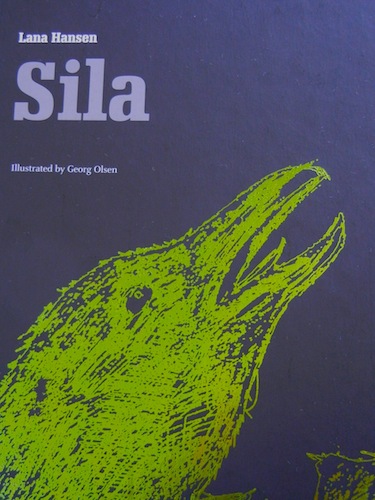 Lana Hansen, originally from Qaqortoq in southern Greenland, write “Sila” in 2009 to tell children eight to 12 about climate change in language they can understand. (PHOTO BY JANE GEORGE) 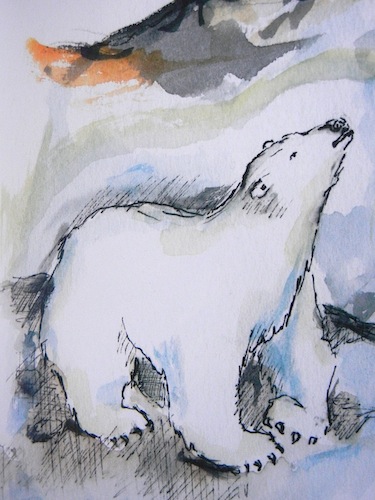 Greenlandic writer, artist and musician Georg Olsen, 36, provided the illustrations, which include this polar bear, for “Sila.” (PHOTO BY JANE GEORGE)

“We’re not museum pieces,” she says over coffee at a downtown café in Denmark’s capital city. “We have our own national identity.”

Hansen, who moved to Copenhagen from Nuuk in 2010, would prefer to talk about a modern reality — climate change — that’s faced by Inuit in Greenland and across the Arctic.

They’re faced with the prospect of huge oil developments, a rush of “black gold,” which will bring with it riches and social change.

The future in store for the island feel more important than clamping down on climate-warming greenhouse gas emissions, Hansen said.

But changing consumer behavior is just as important in Greenland as in larger industrialized nations, “so we face a dilemma,” she said.

Many in Greenland are also so tired of hearing doomsday stories or highly scientific information about climate change that they just let environmental news flow in one ear and out the other, Hansen said.

Even before oil rigs were setting down drills off West Greenland and the Arctic ice melt sped up, Hansen decided to try to talk to young Greenlanders about climate change.

Lying on a beach one day with her daughter, Niini, now 17, Hansen spotted an eagle, and, after she felt the bird looking her straight in the eye, she felt driven to think — and write — about climate change.

Hansen raised enough money from groups like the SAS and Coca-Cola Foundation, the Greenland government and the Christmas Seal Foundation to write a book, Sila, published by Milik Publishing in 2009.

Sila, “a fable about climate change,” draws on the Greenlandic story about the raven “Tulugaq” and the Mother of the Sea, who collects animals in her long hair at the bottom of the sea to punish humans for their greed and unsustainable way of life.

The Mother of the Sea serves as a symbol that we should protect nature — not exploit and pollute it, Hansen said.

Illustrated with magical drawings by Georg Olsen, the book tells how Tulugaq, a boy who can change into a raven, is sent to soothe the Mother of the Sea, the only being capable of saving the world as the great ice sheet melts.

Tulugaq manages to appease the Mother of the Sea, with the help of characters like his girlfriend Asiaq, his rival Matisi, the spirit of the inland ice, a polar bear, whale, eagle, and a reindeer.

There’s also concrete advice at the end of the book, like “turn off your computer,” “take quick showers,” and “walk to school instead of taking the bus.”

Most information about climate change is too complex for children to understand, Hansen said.

But her book aims to appeal to children aged eight to 12.

And it’s been acclaimed.

Now translated into Danish and English, and soon into French, Sila has opened doors for Hansen to talk about climate change — in Copenhagen and at other climate change conferences and meetings from Shanghai to Cancun.

But as Hansen started to talk about climate change, she realized it made more sense to move closer to Copenhagen, so she joined the 8,000-plus Greenlanders who live in this city.

From here, Hansen now serves as of a kind of “cultural” climate change ambassador for Denmark and Greenland, traveling around the world talking about a natural world that’s melting.

While she misses Greenland for its human warmth and humour, there’s more freedom in the city, Hansen admits.

It’s also easier for her to survive materially and financially — and she doesn’t have to wait “20 years” for a nice apartment.

If she’s lonely for Greenland food or friendship she can go to Greenland house on Tuesdays, for fish, and on Fridays, for meat, and in between for coffee and conversation.

In Copenhagen, Hansen’s main job now is organizing an an exhibition featuring Greenland’s top climate artists which will open in 2012 in Berlin and then travel around the world.

In Iqaluit, you can buy Sila at Arctic Ventures. It’s also available from online booksellers. 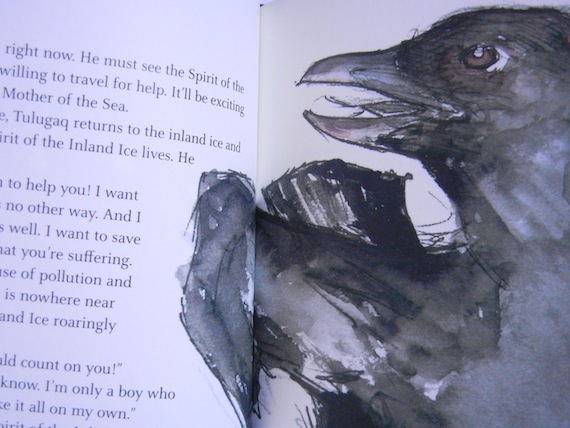 Tulugaq, a boy turned into a raven, manages to appease the Mother of the Sea in “Sila,” which uses a traditional Greenlandicstory to talk about climate change. (PHOTO BY JANE GEORGE)