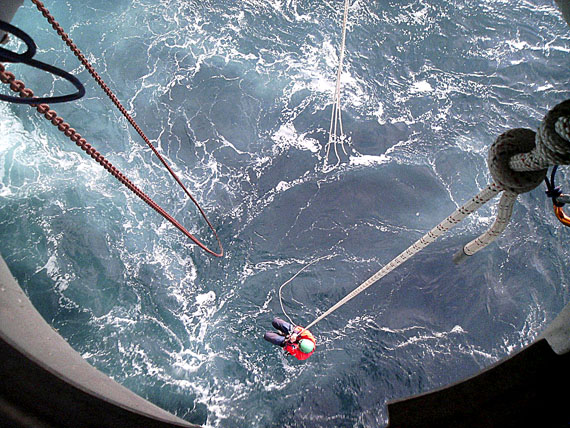 Greenpeace activists scale the underside of the 53,000-tonne Leiv Eiriksson oil rig off the coast of Greenland May 30. The environmental group is protesting Carin Energy’s drilling program in Baffin Bay, which aims to drill three test wells by summer’s end. (PHOTO COURTESY OF GREENPEACE)

Greenpeace activists still hung from the underside of an oil rig off the west coast of Greenland May 30 as they sought to derail Cairn Energy’s summer drilling plans.

Two members of the environmental group were suspended in a “survival pod” hanging 20 metres above the waters of Davis Strait from the oil rig Leiv Eiriksson.

The pod is stationed only a few metres from the rig’s drill bit, according to blog posts on Greenpeace’s website.

“Good morning, I can’t help but notice you have two activists currently close to our rig. Please remove them in the interests of their safety,” a Leiv Eiriksson crew member said in a radio transmission posted on Greenpeace’s website.

There is a Danish warship escorting the Leiv Eiriksson and enforcing a 500-metre exclusion zone around the rig.

Greenpeace has speculated helicopters travelling to and from the oil rig may have been ferrying Danish commandos, something Jørn Skov Nielsen, the director of Greenland’s Bureau of Minerals and Petroleum, denied in a May 25 telephone interview.

“There’s no soldiers, there’s no special commandos or anything on board the Leiv,” he said.

Nielsen said Greenpeace has the right to protest Cairn’s drilling program, but must follow the law.

Greenpeace says drilling in Arctic waters can’t be done safely and that a spill would devastate marine mammal populations in the Davis Strait and Baffin Bay. It also says drilling would release more than 9,000 tons of chemicals into the sea.

“We want this ship to get out of the Arctic,” said Ben Ayliffe, a senior oil campaigner with Greenpeace, in an interview from the Esperanza May 25. He said both the oil rig and the Greenlandic government have refused to release a spill response plan to Greenpeace.

Nielsen said Cairn’s drilling license was granted with extensive regulations based on Norway’s strict rules for drilling in the North Sea.

He said a second drill ship is always near the rig, to drill a relief well in the event of a blowout, and another dozen ships laden with oil spill response equipment are circling the Leiv Eiriksson at all times.

More resources are on stand-by at all towns on Greenland’s west coast, he added.

“The overall elements of the oil spill plan have been publicized, but we don’t see any need to publicize the technical parts of it because there is a chance it wouldn’t work efficiently,” Nielsen said.

Cairn drilled three exploration wells off Disko Island last summer, and plans to drill four further test wells this summer: two more of Disko Island, and two near the Greenlandic capital Nuuk. Drilling for the USD $600 million project will take place in depths of 290 to more than 1,500 metres of water.

Cairn Energy also plans as many as three seismic surveys off Greenland this summer. The company has put the odds striking oil in any of the test wells at between 10 and 20 per cent.

Greenland wants to strike oil to help fund its independence from Denmark. Nielsen said Greenland has the right to issue exploration permits for oil companies seeking to drill in the area.

“It’s a coastal state’s sovereign right to…exploit their natural resources as long as they do it in accordance with international practice.”

“In Greenland, we consider Greenpeace’s actions against oil rigs to be an eternal hunt for media attention and ultimately a hunt for financial contributions from the western world that takes place cynically at the cost of small developing countries’ legitimate right to economic development.”

Okalik Eegeesiak, president of the Qikiqtani Inuit Association, said she has no great love of Greenpeace, thanks to their prior campaigns against the seal hunt.

But Eegeesiak said the QIA shares some of Greenpeace’s concerns about Greenland’s drilling program, such as what would happen to the marine mammals that Greenland and Nunavut share, if there’s an oil spill in the Davis Strait.

“If anything bad happens while they’re exploring or drilling, that affects the marine life that we also hunt over here,” she said.

Eegeesiak added she thinks there hasn’t been enough communication between Nunavut and Greenland on ways to prepare for oil and gas development or respond to oil spills.

A Government of Nunavut spokeswoman said the GN will follow closely the lessons of oil development on the other side of the Davis Strait. It also calls for more research on technology that could be used to clean up Arctic oil spills.