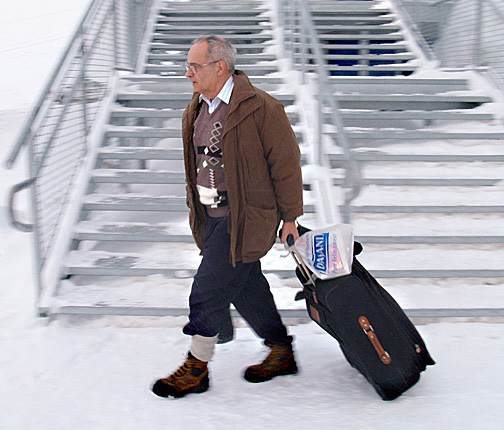 Ed Horne leaves the Iqaluit courthouse after a January, 2008 court appearance. A lawyer for 66 victims of Horne in a separate case announced Jan. 25 that his clients and the governments of Nunavut and the Northwest Territories reached a deal that will pay out $15 million in compensation for sexual abuse. (FILE PHOTO)

People who suffered sexual abuse at the hands of former teacher Ed Horne will share $15 million in compensation under the terms of a settlement announced Jan. 25.

Sixty-six victims, who launched a lawsuit against the governments of Nunavut and the Northwest Territories in 2004, will receive cash compensation, plus access to counselling and treatment paid for by a fund set up under the agreement.

The allegations arise from Horne’s time as a teacher in Sanikiluaq, Apex, Iqaluit, Kimmirut, Grise Fiord and Cape Dorset between 1971 and 1985.

The deal, reached through an alternative dispute resolution process, means Horne’s victims won’t have to testify in court.

“Almost any sensible person would be relieved that something has been settled through negotiation rather than having to go into open court and tell your story,” said Geoffrey Budden, who represented the plaintiffs.

Budden said psychologists and other experts had been retained to examine the plaintiffs and give evidence. In the process, both sides came to the conclusion they could reach an agreement, Budden said.

“I can say that they [the complainants] are all happy the matter’s been resolved without having to go to trial.”

“There have been some new cases that have come forward just in recent months and they’re also working their way through the system,” he said.

Norman Tarnow, the director of legal and constitutional law for the Government of Nunavut, said Nunavut is responsible for 44.34 per cent of the $15 million—nearly $6.7 million— and that the Northwest Territories is on the hook for the rest.

That share is based on a division-era agreement between the two territorial governments that divvied up assets and any future liabilities, Tarnow said.

Budden said he couldn’t comment on exactly how the $15 million will be broken down between cash payments and a fund for treatment.

But he said the fund will be administered by a board similar to the one that managed a $3-million fund that came out of an earlier lawsuit by other Horne victims.

That group of 85 claimants, whom Budden also represented, won a $21.5-million settlement from the GN and the GNWT in October 2002.

The territorial governments originally took a hard stance against the second lawsuit, alleging that some of the complainants might have consented to sexual contact with Horne.

In February 1987, Horne received a six-year jail sentence for eight charges involving 24 boys he molested between 1983 and 1985 in Kimmirut and Cape Dorset.

After Horne served that sentence and left Canada to work in Mexico, another 50 men in Sanikiluaq, Cape Dorset and Iqaluit came forward to disclose that Horne molested them between 1973 and 1982.

A 1985 report to Joe Handley, then the deputy minister of education for the GNWT, showed that members of Kimmirut’s local education committee and government officials in Iqaluit and Yellowknife, struggled with what to do about Horne.

Consultant Kevin Van Camp wrote that many of the people he interviewed said they felt that nothing would have been done had they complained.

“Government is seen as remote and that it would not keep concerns, suspicions, etc. confidential,” he wrote. “Thus the perceived risk by employees at a remote and bottom layer of the bureaucracy was seen to be too great.”

A second letter from Handley to the superintendent of the Baffin divisional board of education in January, 1986, expressed concern over how education officials in the Eastern Arctic were handling the situation. Nunatsiaq News obtained a copy through an access to information request.

Most of the letter, including the name of the Baffin superintendent, is blacked out, but Handley suggests that Baffin officials did not act quickly enough to respond to complaints about Horne’s behaviour.

“I realize that the whole Horn [sic] story goes back further than the time during which you have been superintendent, but I am really concerned that the system allowed this sort of behaviour to go on for so many years.

“There is a need to become more sensitive to students, parents and staff than is presently the case.”

In 2008, Horne was found not guilty of a third batch of 10 sex-related charges brought by complainants from Iqaluit, Cape Dorset, Sanikiluaq and Kimmirut.

Horne, who worked as a bicycle courier in Toronto during that trial, later moved to Nicaragua.

In November, 2009, he joined Netlog, a social network that bills itself as an “online community for more than 73 million young people.”