“We have a life support system in case of emergencies” 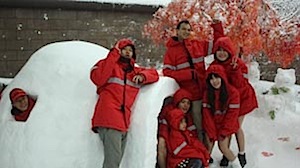 Now a “Snow Dome,” tomorrow “Polar World” at the Chiang Mai zoo in Thailand. Near a panda display, “the visitor will experience the imitation cold atmosphere with a snow storm from Chengdu, China, the happy home of the panda family,” says the zoo’s website about this photo.

Some polar bears may live out their days in a $2.23 million, air-conditioned pen, along with king penguins to keep them company — in Thailand.

That’s the plan of the Chiang Mai Zoo, which is forging ahead with its “Polar World” project despite opposition from animal rights activists, reports the Bangkok Post.

The zoo has been negotiating with zoos in Russia and Canada as well as with Safari World in Bangkok, where four polar bears are kept, he said.

The polar animals chosen for that zoo were born in captivity, so they would adapt to the new environment easily, Tanapattara said.

“We have a life support system in case of emergencies, together with plans to reduce the animals’ stress in a new environment,” he said.

The addition of polar animals at the zoo is expected to boost yearly visitor numbers from 700,000 to more than a million.

Near a panda display, “the visitor will experience the imitation cold atmosphere with a snow storm from Chengdu, China, the happy home of the panda family,” says information on the the zoo’s website.

Its website notes other “star creatures” on display, including a Cape fur seal. To get in to the zoo’s exhibits, foreigners pay double the rate of Thai nationals.

Environmentalists say “Polar World” will gobble up expensive electricity — and at 18 C to 20 C, the temperature still be too warm for the animals.

“The zoo’s argument is that the animals are already held in another zoo and the exhibits will be cooled by generators! The basic facts are that these animals at some point were caught in the wild, drugged, beaten and kept in constant fear and held as prisoners for money! Either way, this zoo wants to incarcerate yet more animals for the paying public’s entertainment, but they want to increase global warming as well,” says a petition they handed to the zoo this past week, which says the zoo should invest the money in wildlife conservation instead.

That’s an opinion echoed by a commentary which recently appeared in the Bankgok Post, which said “what Thai zoos need at the moment is not rare animals from overseas, but a major overhaul in zoo management. Concerned agencies must also make sure that wildlife conservation, not tourism, is the first priority of the zoo management.”