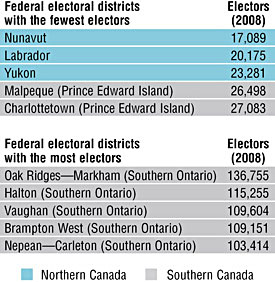 A population comparison between electoral districts in southern and northern Canada. (CONFERENCE BOARD OF CANADA)

Canada’s electoral districts may be isolated and thinly populated, but when it comes to voting power, each vote cast by a northern resident packs a wallop, the Conference Board of Canada says.

That’s because northern federal ridings, such as Nunavut, Labrador, Western Arctic and Yukon, are created as special exceptions to the rules that Elections Canada uses to guarantee representation by population.

To ensure the voting power of Canadians is spread more or less equally, most electoral districts may not contain a total number of electors that is 25 per cent greater or fewer than the average.

But for the North, and some other regions, Elections Canada makes an exception, to take northern geography and northern aboriginal cultures into account.

That’s why Nunavut, the smallest electoral district by population, contained only 17,089 eligible voters in 2008.

The largest electoral district in Canada by population, Oak Ridges-Markham, is a sprawling suburban region just north of Toronto, contained a whopping 136,755 electors.

Five northern ridings combined — Yukon, Western Arctic, Nunavut, Labrador, and Kenora — still do not equal the number of voters in that riding.

“In general, Canada’s northerners are — numerically at least — well represented in Ottawa,” the Conference Board said. 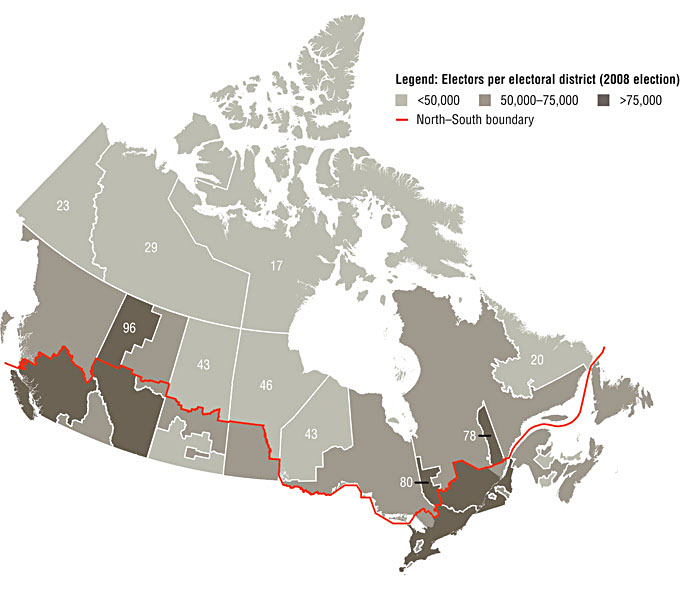 This map shows the most thinly populate electoral districts in Canada. (CONFERENCE BOARD OF CANADA)