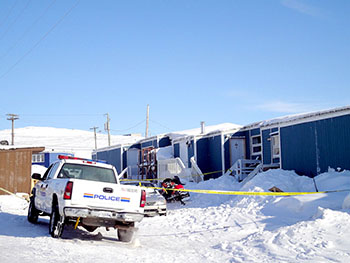 Iqaluit RCMP members secured the area in front of housing unit 415-B for three days following a bloody stabbing incident there on the evening of March 26 that left Jason Kipanik suffering from life-threatening wounds. Jayko Kilabuk was found guilty of aggravated assault for his part in the incident. (FILE PHOTO)

Jayko Kilabuk, 29, of Iqaluit is guilty of aggravated assault for stabbing an another Iqaluit man so badly that he lost seven litres of blood, Justice Robert Kilpatrick ruled Jan. 21, in a written judgment.

On March 26, 2010, Kilabuk used a hunting knife to stab Jason Kipanik, then 29, numerous times during a drunken brawl at Kilabuk’s residence, house 415-B in Iqaluit.

Kilabuk also cut Kipanik’s face wide open, leaving a gaping six-centimetre wound from his upper lip to the bottom of his left ear.

Because doctors had to use staples to close his face wound, Kipanik was unable to eat solid food for months.

In his defence, laid out at a lengthy trial this past fall, Kilabuk testified that he stabbed Kipanik in self-defence, saying Kipanik attacked him first.

But Kilpatrick rejected that claim, saying Kilabuk did not need to stab Kipanik to defend himself.

“The resort to a knife and the infliction of the many injuries upon Kipanik was a grossly disproportionate response to the threat posed to the defendant by Kipanik’s kick,” Kilpatrick said.

The brawl started about 20 minutes after Kilabuk and his wife, Napatchie Lyta, arrived back at house 415-B after an evening of drinking at local bars with Kipanik and his girlfriend, Lalenia Flaherty.

There, they continued drinking from a bottle of Smirnoff vodka until a dispute broke out between Kilabuk and Lyta over “the possession or control of the couple’s cannabis.”

Kipanik, who Kilpatrick said has little tolerance for men who physically abuse women, jumped into the fracas and confronted Kilabuk.

At the trial, Kipanik and the two women who witnessed the fight couldn’t remember many details because of their extreme intoxication at the time.

But Kipanik said he recalled wrestling with Kilabuk after he was stabbed and that Flaherty eventually helped him take the knife away from his assailant.

When the police arrived, the two men were still wrestling on the floor.

At trial, court saw two contradictory statements from Kilabuk. In the first, he claimed Kipanik arrived at the house with a knife and stabbed him as soon as Kilabuk opened the door.

In another statement to police, Kilabuk claimed Kipanik pulled the knife after the fight started.

But in evidence that he gave in his defence at trial, Kilabuk said he pulled the knife himself from his own workbag.

All this, Kilpatrick said, suggests that Kilabuk “was readily prepared to lie to the police.”

Kilpatrick also found Kilabuk guilty on a charge of wilfully breaching a court order by failing to keep the peace and be of good behaviour and on another charge of breaching a probation order by consuming alcohol.

Kilabuk is to be sentenced later this year.