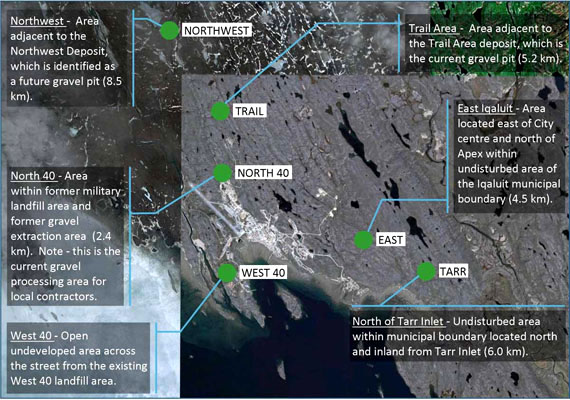 This illustration shows waste disposal sites that are being considered to replace Iqaluit’s current landfill, which is now at capacity. Three of the sites, North 40, West 40 and East, were identified by local residents at a public consultation last April. (IMAGE COURTESY OF EXP)

The architects of Iqaluit’s waste management project have presented a vision on how the city can improve waste treatment, including possible recycling, composting and waste-to-energy programs.

The city’s current landfill is not only full but considered a hazard after it burned for several weeks last fall, sending noxious smoke over the city.

That’s why the city of Iqaluit hired a firm called Exp – formerly Trow Associates – to come up with a preliminary design for new solid waste facilities for Iqaluit.

After public workshops and discussions with residents and stakeholders, consultants presented their preliminary vision to city council June 28.

• a re-use centre at the city landfill to allow residents to leave items that are still in useable condition;

• an end of life vehicles program that would hire staff to remove hazardous materials and salvage metals from old vehicles before they are shipped south;

• a residential/commercial recycling program for household materials and bulk waste – either through curb-side collection or at a local depot;

• a composting program; either through an open-window method, where piles of organic materials are turned regularly for aeration or another method called in-vessel, where composting happens in closed and controlled reactors;

• a hazardous waste depot, where residents and business can leave materials to be shipped to southern treatment plants;

But even if these programs are implemented, Iqaluit still requires a new landfill site — one that can meet the needs of the city for the next 40 years.

Consultants are looking at six potential sites — some within the existing municipal boundaries (see figure.)

The sites are located between two and eight kilometres from the city centre.

“We really want to make sure these decisions are long-term,” said John Smith, a senior waste management specialist with Exp, told city council June 28. “And it’s important that we hear from as many people as possible as we can for this project.”

Smith and his colleagues are now tasked with analyzing and researching the list of options. They’ll bring their preferred recommendations back to city council in the fall of 2011.

City council will then make a final decision.

Smith said it’s too soon to put a price tag on many of the diversion options, saying only that the cost will be “significant.”

A composting program alone could cost upwards of $1 million to start-up, he said; an incineration project could cost multi-millions just to launch.

“This will definitely take some capital,” Smith said. “A (new) landfill will take somewhere around $4 million to $6 million to develop. Obviously, the cost is something we have to look at.”

The consulting firm is also conducting a waste audit this week, to “characterize” what Iqalummiut are throwing away.

This is the first local audit in a decade, which will take a representative sample of waste from different homes and businesses in the community.

From there, the waste will be categorized and weighed so consultants can see if the city’s waste looks any different than it did ten years ago.

Whatever the future of Iqaluit’s waste management ends up looking like, Smith said the Arctic environment and its sustainability will be key factors.

“Many of these technologies have not been proven in Arctic conditions,” he said. “This will be of great interest to a lot of other communities in Nunavut. They’re all facing similar issues.”

Once Iqaluit’s waste management plan is determined, the city can work towards a plan to decommission the current landfill.