“I wanted it to be relevant” 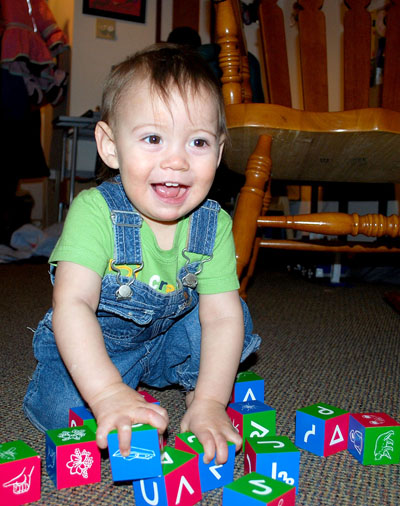 It’s not unusual to see libraries and schools in Inuit communities across the north filled with mostly English-language books and materials based on life in the south.

That’s why one Iqaluit family decided to create something relevant for their own children and other Inuktitut-speaking youngsters.

The product: a set of 16 wooden blocks, each with three Inuktitut syllabics corresponding to Inuit icons like the ulu, caribou antlers and berries.

The colourful, one-and-half-inch blocks serve as both a toy and an educations resource.

“There are lots of English and even French-language resources here but not much in Inuktitut,” Buscemi said.

“So we started looking at how to get some made. (My wife and I) wanted it to be relevant to the Inuit and the north.”

Buscemi says his own kids, who speak both English and Inuktitut at home, have been playing with a prototype of the blocks for the past couple of years now — stacking them, creating words and inventing games.

Although the blocks were originally made for young children, Buscemi said adults have been buying and using them, too.

Since the first batch came off the sealift last October, the Buscemis have sold 50 sets — while the Government of Nunavut has distributed hundreds more in schools and daycare centres across the territory.

When the Buscemis first embarked on the project, the GN provided the start-up funding.

The Buscemis designed the blocks, which were then manufactured and shipped from China.

Now the GN has ordered another 500 sets, while the blocks are also on sale at the Malikkaat store and the Nunatta Sunakkutaangit museum in Iqaluit.

The block sets won’t likely be a money-maker for Buscemi and his family; the blocks cost $47 a set to manufacture, so the $60 price tag barely covers their expenses.

But Buscemi says he was never in it for the business.

“This has been a fun process for us and people are really excited to see them,” Buscemi said. “People say they really needed that kind of resource.

“And I just want to make sure children have access to Inuktitut around them.”

If he can find the time, Buscemi said he’d also like to design Inuktitut-language cardboard books for pre-schoolers and kindergarten-aged children.