“My constituents are missing me. So is my family.” 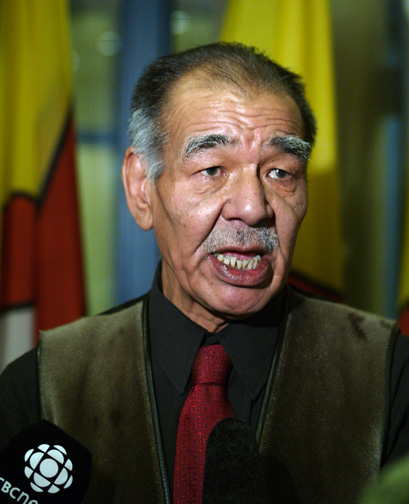 Louis Tapardjuk speaks to reporters outside Nunavut’s Legislative Assembly Oct. 28 after announcing his resignation from cabinet. Tapardjuk said he’ll stay on as MLA for Amittuq. (PHOTO BY CHRIS WINDEYER)

In an emotional speech to the assembly, Tapardjuk, speaking as always in Inuktitut, said he’s been proud to watch Nunavut’s transformation from being governed from afar, to a decentralized, self-governing territory.

First elected as the MLA for Amittuq in 2004, and elected again in 2008, Tapardjuk said he’s sought to uphold his oath of office as both and MLA and cabinet minister.

Speaking to reporters, Tapardjuk said he wanted to resign before the Nunavut Leadership Forum that’s scheduled to start Nov. 3, so MLAs could choose a replacement.

Tapardjuk has been in cabinet for all of his career in territorial politics, and said he’s looking forward to trying life on the other side of the house as a regular MLA. He plans to continue to represent Hall Beach and Igloolik in the assembly.

“My constituents are missing me,” he said. “So is my family.”

Tapardjuk is the only cabinet minister to have served under both former Premier Paul Okalik and current Premier Eva Aariak. He has served as the minister of Culture, Languages, Elders and Youth, languages, Education, Finance and, briefly, Justice.

He was forced to resign from that portfolio in January, 2009, after writing a letter to department staff in which he complained men were sometimes unfairly blamed in domestic disputes and wrote that the Canadian justice system was partly responsible for Inuit suicides.

He later apologized for the comments and said they were meant to encourage closer work between CLEY and justice officials. Tapardjuk told reporters Oct. 28 he wishes he’d been able to establish a more Inuit-centric justice system in Nunavut.

“The court system and control system need to be addressed because it’s alien to the thinking of our elders,” he said. “They’ve never had to deal with a court system before… you know, we have an enigmatic social malaise.”

He said he’d miss working as CLEY minister and was especially proud of the passage of major Inuit language legislation and the Family Abuse Intervention Act, which sought to install Inuit values into solutions for domestic violence.

Other veterans of Nunavut politics paid tribute to Tapardjuk in the assembly. Tagak Curley, the health minister, called for and got a standing ovation for Tapardjuk from MLAs.

“It’s going to be impossible to replace him,” Curley said.

Premier Eva Aariak told reporters Tapardjuk made huge contributions to Nunavut as CLEY minister and will ask tough questions of the government in Question Period.

“That (CLEY) was his passion,” she said. “And I am sure that he will also continue to push us toward continuing to finish the mandate (of) CLEY.”

Aariak will take over Tapardjuk’s portfolio as minister of CLEY, Languages and the Utility Rates Review Council. But she said it’s likely she’ll give up those responsibilities soon, since a leadership forum is slated to begin Nov. 3 and MLAs will likely select a replacement for Tapardjuk.

Sources at the assembly have said at least one other cabinet minister as well as Aariak herself, could face a challenge during the leadership forum.

“It’ll be entirely up to the individual regular members to conduct their questions…. We try to do our best on our side (cabinet) to conduct our business, so we’ll see what happens,” Aariak said.