Now en route to Haughton Crater, “the most Mars-like environment on Earth” 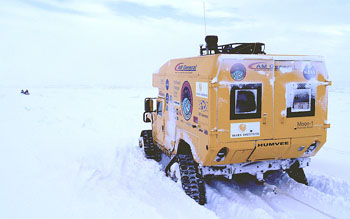 Moon-1 struggles through deep snow as it follows its snowmobiling guides across the sea ice.

NASA’s attempt last year to drive a modified Humvee all the way to its simulated Mars base on Devon Island nearly ended in disaster.

Thick snow concealed a lead of open water ahead of the vehicle, which narrowly avoided falling right into the ocean.

At a presentation at the Nunatta Sunakkutaangit Museum in Iqaluit on May 3, Mars Institute director Pascal Lee showed a Power Point presentation of the trip from Kugluktuk to Cambridge Bay, 500 km across the ice of Coronation Gulf, made between April 17 and April 25, 2009.

The journey was supposed to proceed on to Resolute and then to Haughton Crater on Devon Island, often called the most Mars-like environment on Earth.

But days of whiteout conditions and the near-loss of the vehicle through the ice made NASA change its plans, instead bringing it by air from Cambridge Bay to Resolute for the final trek to Haughton Crater.

The “Moon-1 experimental vehicle” is a customized Humvee equipped as if it were a manned vehicle on Mars.

Its former military medical beds are now sleeping bunks for the crew, and its wheels are replaced with treads for all-terrain capability.

It was that capability that saved the vehicle from an icy demise. With the sea ice covered in new snow, the driver didn’t see a lead of open water as he drove across it.

Although the front treads cleared the gap, the rear treads fell into the water and the vehicle tilted alarmingly back and its bottom scraped the ice.

“I saw sky out of my windshield,” Lee recalled at the Nunatta Sunakkutaangit presentation.

The crew bailed out of all available doors and contemplated what to do next.

They saved the vehicle by anchoring steel bars into the ice cover ahead, then using the vehicle’s winch.

At the same time, the Humvee’s onboard computer concentrated its power onto the single front wheel tread still with purchase on the ice.

Another challenge was the weather. Over the first three days out of Cambridge Bay the team averaged 50 km of travel a day.

At one point the vehicle was immobile for 40 hours as the team waited out whiteout conditions, the engine running all the while.

“You don’t know after ten hours of doing this that you have 30 more to go,” Lee said.

Because of the tracked system and the need to keep the engine warm even through days of being weathered in, Moon-1 averaged a gallon of diesel per two km of travel.

The team noticed the poor mileage almost right out of Kugluktuk, so they sent some of their Nunavummiut, snowmobiling guides back to two to pick up more fuel.

By the end of the trip to Cambridge Bay, Moon-1 had used 80 per cent of its fuel.

The trip took eight days instead of the expected four.

Moon-1 set out from left Resolute May 4, bound for Haughton Crater.

As of press time, the expedition’s website reports that recent heavy snowfall has slowed the trip and tired the crew as they approach Devon Island across Wellington Channel.