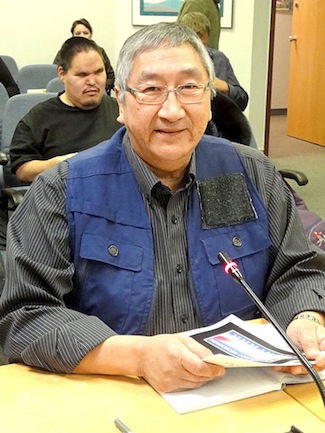 The Nunavut Resources Corp. is the next step Inuit need to take to contol their future, Charlie Evalik, the president of the Kitikmeot Inuit Association, said at the organization’s annual general meeting in Cambridge Bay. (PHOTO BY JANE GEORGE)

This corporation, formally set up last January, plans to invest in gas, oil or mineral projects and bring them into production.

And, when the NRC owns these projects, this means Inuit in Nunavut will never again toil for low wages while billions of dollars in revenues flow out of the territory, said Charlie Evalik, KIA president, said Oct. 5 at the organization’s annual general meeting in Cambridge Bay.

“What KIA has come to realize is that Inuit are at risk of becoming the last people to benefit from resource development on their own lands,” Evalik said in his Oct. 4 president’s report.

Through this new corporation, KIA wants to position itself to become “a significant player” in managing and developing non-renewable resources on its Inuit-owned lands, Evalik said.

The world is coming to the North to develop and mine Inuit resources, so Inuit must be in control and develop projects on their lands, Evalik said, saying the NRC ‘s slogan is “reclaiming our land, setting our own destiny.”

This is how the scheme could work: the NRC could, for example, build all the infrastructure that a mining company like Sabina Gold and Silver needs to move into production, rent this infrastructure, back to the company and then invest profits into the mine as a full-fledged partner.

The progress report on the NRC, which was first mentioned publicly at the 2009 KIA annual general meeting, comes as gold has hit record highs and outside investors are eyeing northern resources with greater interest.

Those at the meeting heard how the Kitikmeot could eventually become home to two of world’s largest precious metal mines, owned by Newmont Gold and Sabina.

The NRC will also offer more employment, training and business opportunities, Evalik told them, urging young Inuit to finish their education, which is the “key” to their prosperity and the success of the new corporation.

“I’m going to need MBAs, engineers,” Evalik said in an Oct. 5 presentation of the NRC. “Inuit need to apply themselves.”

Other regional Inuit organizations have been invited to join the corporation, which is shaping up quickly, thanks to $1 million last year in federal seed money and another $1 million in the works for this coming year.

A technical advisory team is now working on fine-tuning the NRC’s structure.

And several high-powered names have agreed to join the corporation’s board, such as David Elliott from Haywood Securities Inc., and a former vice-president of the Toronto-Dominion Bank, Scott Northey.

Former Alberta premier Peter Lougheed is a special advisor to the NRC board, which has already met three times in 2010.

KIA board members enthusiastically supported the idea of the NRC.

Bobby Lyall, KIA board member for Taloyoak, speculated that the new corporation might also serves as “a vehicle for independence or the Kitikmeot,” an idea that still is popular among some people in the region who feel alienated from the Nunavut government in Iqaluit.

At the same time as it pushes ahead with the NRC, the KIA is negotiation a new impact and benefits agreement for Newmont Gold’s Hope Bay Mining Ltd. for the expansion of its Doris North project south of Cambridge Bay and also in discussions with Sabina on its mining project— but the nature of these talks could change as the NRC plows ahead.

As part owners in a mining project like those two, the NRC would receive more than handouts of money, jobs and contracts: Inuit would have direct decision-making input, Evalik said, emphasizing that this represents the “next stage” for Inuit control over their lands and future.

The KIA is also working on a new mineral resource revenue policy with the other Inuit organizations and Nunavut Tunngavik Inc., that would spell out how revenues from any new developments will be distributed.