“I suspect we’ll want to consult widely and broadly” 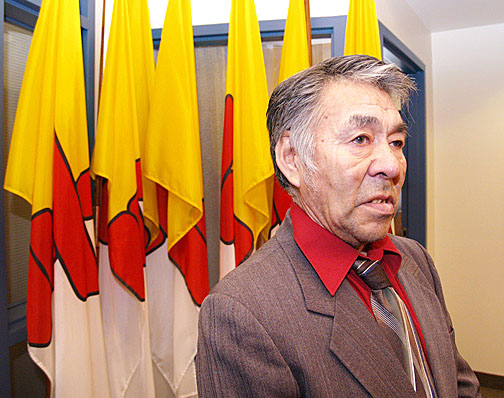 Akulliq MLA John Ningark wants his riding broken up after the new electoral boundaries commission completes its work in 2011. The Nunavut Legislative Assembly voted to establish a new commission that has 250 days to come up with a proposal to change Nunavut’s electoral map. (FILE PHOTO)

The countdown is on for Nunavut’s newly-formed electoral boundaries commission.

MLAs passed a motion formally establishing the commission and giving it 250 days — until July 2, 2011 — to come up with recommendations for changes to Nunavut’s electoral map.

They also announced who’s sitting on the commission: Justice Ted Richard of the Northwest Territories Supreme Court, who will chair the body; Gordon Main, a justice of the peace and former municipal councillor from Arviat; and Kirt Ejesiak, a former federal Liberal candidat who has also served as Iqaluit’s deputy mayor.

If this commission is anything like the last one, which did its work in 2006, it will travel to almost all of Nunavut’s communities to seek input.

“We’ll be taking the lead from Justice Richard, but I suspect we’ll want to consult widely and broadly so that we get everyone’s point of view,” Ejesiak said.

The commission was formed after Sandy Kusugak, Nunavut’s chief electoral officer, ordered a review after the 2008 election, because population growth has caused major changes to the number of eligible voters in many ridings.

Kusugak singled out Amittuq (Igloolik and Hall Beach), Iqaluit East and Rankin Inlet North as constituencies that have grown more than 30 per larger in population than the average.

Under the law, all ridings except for remote Sanikiluaq, must be no more than 30 per cent larger or smaller than the average in population.

Nunavut’s electoral boundaries were originally created in 1997 and haven’t changed since division in 1999. Any changes proposed by the commission wouldn’t come into effect until the next general election, likely in 2012.

The commission will also likely have to tackle the lingering question of what to do the Akulliq riding, which takes in the communities of Repulse Bay and Kugaaruk.

No one has ever really been happy with the existence of a riding that straddles the Kitikmeot and Kivalliq regions.

The current Akulliq MLA, John Ningark, who also sat on the last electoral boundaries commission, said both he and his constituents want to see the end of the Akulliq riding.

Ningark said he’s expected to attend meetings of two Inuit associations, mayor’s conferences and other boards, and he often has to spend four days travelling between the two communities, which are only 150 kilometres apart.

“That means a lot of money I spend on travel, in fact I don’t know if I have any more money in my travel budget,” he said.

Repulse Bay would have joined either Coral Harbour or Chesterfield Inlet and Whale Cove in a new riding.

But MLAs threw out the report in 2007 because they didn’t want to make the final decisions on changes to Nunavut’s electoral boundaries.

The proposal would have added four MLAs and a bloc of representatives, mostly from the Baffin region, objected that this would cost too much.

Ningark said he hopes his fellow MLAs will heed whatever report the commission comes up with and make a decision.