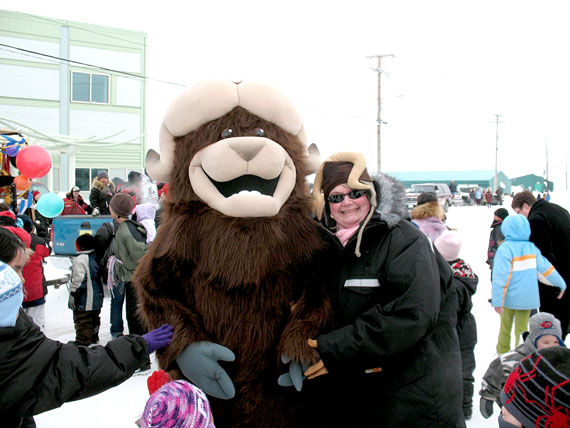 Ollie the Omingmak will visit Cambridge Bay between May 17 and May 24 for the town’s annual spring festival, the Omingmak Frolics. A donation to the local food bank will get you a souvenir photo with Ollie. (PHOTO COURTESY OF B. MERCER)

People in Cambridge Bay plan to knock themselves out this week at the town’s annual Omingmak Frolics.

The volunteer-organized festival, which includes many traditional and cultural activities, kicks off May 17, and winds up a week later during the evening of May 24.

The schedule includes contests for all ages and tastes, including a fish filleting competition and snowmobile races, as well as performances by local musicians and a parade down the main street of town.

The only concern, organizers say, is that there many not be as much snow as usual, due to the unseasonably warm temperatures of this spring.

Those lucky enough to be in Cambridge Bay during the festival will also be able to get a souvenir photo with its mascot, Ollie the Omingmak, in exchange for a donation to the Wellness Centre’s food bank.

The week-long Omingmak frolics include:

• an Arctic sports competition whose winners will receive gold, silver or bronze medals;

• a movie night featuring the film Avatar for teens;

• filleting contest to see how quickly competitors can fillet a fish;

• performances by the Ualiningmiutun Numiqtit drummers and dancers, followed by an elder’s demonstration;

• an amateur talent show and “King and Queen” competition;

• television-inspired events, including a “Family Feud” contest, and a “Last Ikaluktutiakmiut Standing” contest, previously known as Fright Factor, to test participants’ endurance and “yuck” factor; and,

A country foods community feast sponsored by the Kitikmeot Inuit Association, Newmont, Sabina Gold & Silver and Nasittuq Corporation on Saturday, May 22, at Kiilinik High School from 5:30 pm to 7:30 pm.

There will also be a “cook-off” contest sponsored by Hamlet of Cambridge Bay on May 24. To enter, cooks can bring a large pot of their favourite recipe and a ladle for serving to the Luke Novoligak Community Hall, where cash prizes will be awarded in the categories of best soup, best stew, best chili, and best bannock.