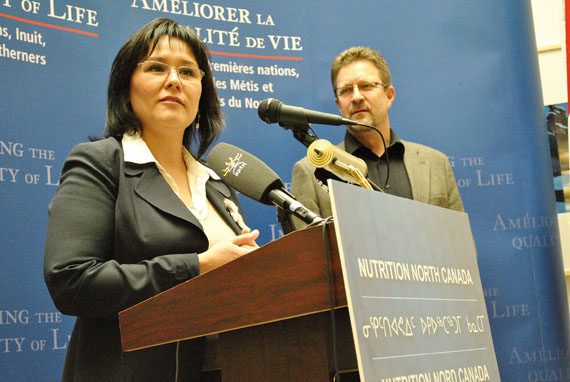 Leona Aglukkaq, the Nunavut MP and national health minister, told reporters May 21 that northern consumers believe the old food mail subsidy was not being passed on and that northerners deserve a better system to reduce the cost of nutritious food. (PHOTO BY JIM BELL)

Consumers in Nunavut and Nunavik can now get ready to say goodbye to the federal government’s 40-year-old food mail program and prepare to welcome a new food subsidy scheme called Nutrition North Canada.

“It’s a bit of a shot across the bow of the retailers,” northern affairs minister Chuck Strahl told reporters May 21.

With Leona Aglukkaq, the national health minister and MP for Nunavut standing by his side, Strahl announced that as of April 1, 2011, his department will work directly with all northern food retailers, large and small, to apply a $60-million-a-year subsidy aimed at reducing the cost of nutritious food for consumers.

Strahl and Aglukkaq said the new program will force retailers to become accountable for passing the subsidy on to consumers, and that consumers will benefit from a transparent system that will let them see exactly how the subsidy reduces their food bills.

“It was so apparent to the consumers that the subsidy was not being passed on, and, as northerners, we deserve better,” Aglukkaq said.

Canada Post forced retailers to ship their food items through certain “designated entry points,” such as Val d’Or, Quebec to be eligible for the subsidy.

But now, federal officials say the new plan will allow market forces to determine the way food is shipped to the North.

Officials from INAC and Health Canada told reporters at a not-for-attribution briefing that food retailers will get the subsidy based on the total per-kilogram weight of food shipped to them.

As of April 1, Canada Post’s food mail scheme will cease to exist. As of Oct. 31 this year, a new, pared-down list of eligible items will come into effect.

At the same time, they’ve divided those eligible food items into two categories: “Category 1” and “Category 2.”

Individual consumers may still make personal food orders from southern retailers who chose to work with INAC on the new scheme.

At the same time, only nutritious food items, and some other goods, such as personal care items, will be eligible for the subsidy.

The plan will also subsidize the retail cost of commercially-produced country food, but federal planners have not figured out a way of subsidizing the transport or sale of country food caught by individual hunters.

• garlic bread and croissants, because of their high fat content;

• whole pumpkins, because they’re used mostly for Hallowe’en and not for food;

• processed cheese spreads, because of their high sodium content;

• side bacon, because of its high sodium and fat content, although back bacon will still be eligible;

The program will eliminate nearly all non-food items from the list, such as machine parts, kitchen appliances and clothing.

But the new list does contain some essential non-food items:

Northern retailers appear to be willing to work with the new plan and say it will help them ship perishable foods more quickly and more efficiently.

Eric Pearson, the co-owner and manager of Newviq’vi, the largest retail store in Kuujjuaq, said he’s happy the new system eliminates the use of awkward designated entry points like Val d’Or, Que, from which all Nunavik and Baffin food mail must now be sent.

The new system means retailers in Nunavik won’t have to ship goods from Montreal to Val d’Or anymore, a system that reduced the quality of perishable goods.

“In that respect the product will be a lot fresher,” Pearson said.

Pearson also said his business already works with a provincial subsidy scheme managed by the Kativik Regional Government by which a list of 30 items are subject to a 20 per cent discount.

Kenn Harper, owner of the popular Arctic Ventures store in Iqaluit, said the new system doesn’t come as a big surprise to him — and that he’s prepared to work with it.

“It’s not exactly what I would have lobbied for, but the job of someone in the retail industry is to find out what the rules are and find a way to function within those rules — and that’s what we will do,” Harper said.

Harper said he’s “pleased” that Ottawa has pared down the eligibility list “to make more sense.”

That includes many expensive non-food items that retailer were shipping to the North using cheap food mail freight rates.

“It was getting quite out of hand and eating up a lot of the subsidy that was not going toward food… for the most part, these changes are good,” Harper said.

Michael McMullen, executive vice-president for northern retail at the Northwest Co., was not immediately available for comment May 21.