“We know people are leaving” 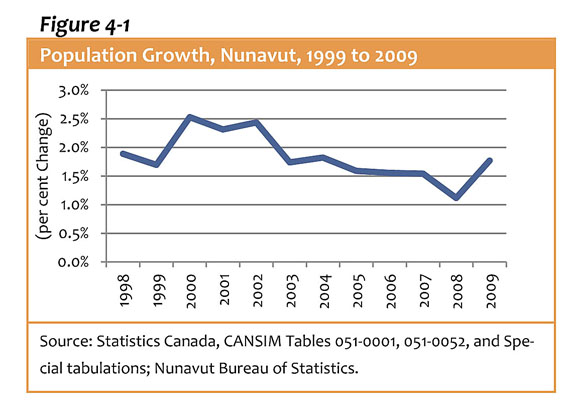 This graph shows the declining rate of population growth in Nunavut since around 2002, when growing numbers of people, including Inuit, began leaving the territory for other regions of Canada. (SOURCE: 2010 NUNAVUT ECONOMIC OUTLOOK)

Because unexpected numbers of people leave the territory every year, Nunavut’s population is growing far more slowly than anyone expected 10 years ago, the 2010 Nunavut Economic Outlook has found.

The economic outlook report, released Jan. 27 by the Nunavut Economic Forum, said that as of July 1, 2009, Nunavut’s population estimate stood at 32,183.

A decade ago, that’s the population figure Nunavut was expected to reach by 2006.

Nunavut’s population grew rapidly between 1999 and 2002, but after that time, the rate of increase plummeted because of outmigration.

Clinton said no one knows why this is happening, because no one has done the necessary surveys.

“We can speculate, but it’s a interesting question to look at. There’s no way to confirm if people are leaving because of housing issues, or safety and security issues or because of education purposes,” Clinton said.

But he did say increasing numbers of Inuit are leaving Nunavut, and that people continued to leave the territory even before 2008, when the economy grew rapidly and hundreds of new jobs were being created.

“If this is the start of a worsening trend, Nunavut will have to learn more about the characteristics of the people leaving,” the outlook report said.

At the same time, Nunavut’s high fertility rate continues to hold steady. In 2009, 801 babies were born in the territory.

All those new babies kept the average population growth rate at an average of 1.8 per cent per year over the past decade — much lower than planners once expected.

“This is not the type of growth predicted 10 years ago,” the report said.